Fact Check: Suresh Joshi Did Not Give This Statement About Changing The Constitution, Viral Post Is Fake 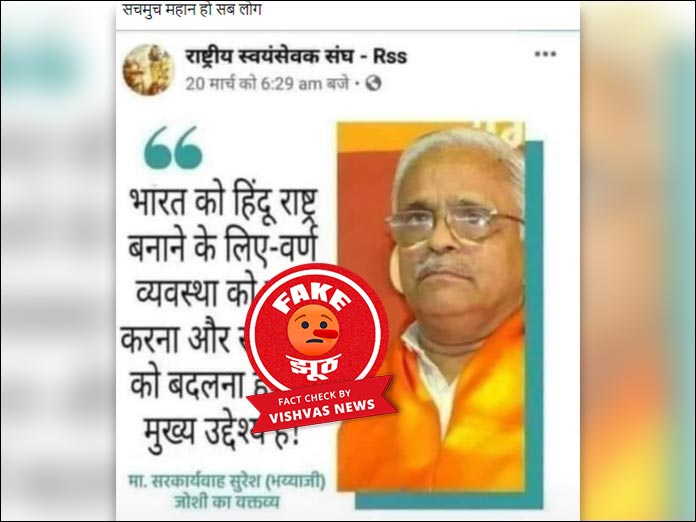 New Delhi (Vishvas News): A statement in the name of Suresh Bhaiyyaji Joshi, former Sarkaryawah (General Secretary, the second in command) of the Rashtriya Swayamsevak Sangh (RSS) is going viral on social media. In his statement, it is allegedly being said that “our aim is to implement the varna system and change the constitution to create a Hindu nation in India”.

During our investigation, we found that Suresh Bhaiyyaji Joshi has not given this statement. The viral post is fake.

On the Facebook page, ‘Atheism with, the fight against hypocrisy’, user ‘Guru Prakash Bharti’ shared a post, in which the picture of Suresh Joshi is shared with a claim, ‘Varna system to make India a Hindu nation. Implementing it and changing the constitution is our aim! “Sarkaryavah Suresh (Bhaiyyaji) Joshi’s statement .”

We started our investigation using Google Search. We used appropriate keywords to find out any statement said by Suresh Joshi. In the search, we did not find any such article related to Suresh Joshi, former Sarkaryavah of RSS. This proves that the viral statement is falsely attributed to the leader.

For confirmation related to the post, Vishvas News contacted RSS’s Sangh Pracharak chief Narendra Kumar and shared the viral post with him. He said, Bhaiyya ji Joshi has not given any such statement. This is a false statement and is not the opinion of the Sangh either. “

During the social scanning of the Facebook user Guru Prakash Bharti, who shared the post, we found that 4434 people follow the user. The user is based out to Amritsar, Punjab.

Conclusion: During our investigation, we found that Suresh Bhaiyyaji Joshi has not given this statement. The viral post is fake.