Fact Check: The man in the video is YouTuber Nitish Rajput, not former IPS Shailjakant Mishra

In the investigation of Vishvas News, the claim being made about the viral video in the name of IPS Shailjakant Mishra proved to be false. The person seen in the video is businessman and YouTuber Nitish Rajput. 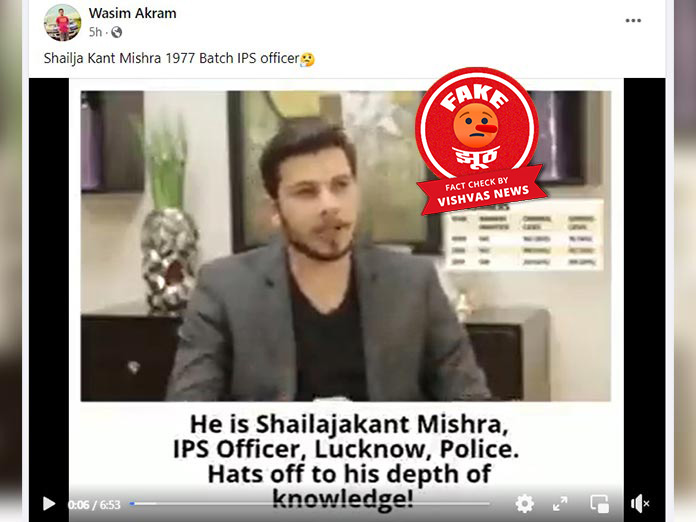 Vishvas News (New Delhi). A video of a man talking on the issue of politics and crime is going viral on social media. Sharing the video, users are claiming that this person is a 1977 batch IPS officer and Lucknow’s Director General of Police Shailjakant Mishra. The viral claim turned out to be false in the investigation of Vishvas News. The person seen in the video is businessman and YouTuber Nitish Rajput.

To know the veracity of the viral video, we extracted several keyframes of the video and searched them with the help of Google reverse image. We Found the complete video uploaded on a YouTube channel named Nitish Rajput on 26th July. On checking this channel, we found that the name of the person seen in the video is Nitish Rajput.

Taking the investigation further, we started scanning the social media accounts of Nitish Rajput. According to the Twitter and Instagram profiles of Nitish Rajput, he has an engineering degree and is a businessman by profession. Also, he runs his own YouTube channel.

We reached out to Nitish Rajput for confirmation. He told us, “the viral claim is false. This video is mine and I am not an IPS officer. I am a businessman and youtuber by profession.”

At the end of the investigation, Vishvas News did a social scanning of the user ‘Amit Shah’. 221 people follow the user on Twitter. As per the information given on the profile, the user is active since July 2010.

Conclusion: In the investigation of Vishvas News, the claim being made about the viral video in the name of IPS Shailjakant Mishra proved to be false. The person seen in the video is businessman and YouTuber Nitish Rajput.