Fact Check: The name of Shahrukh Khan’s upcoming movie ‘Pathan’ has not been changed to ‘Jawan’, false claim viral 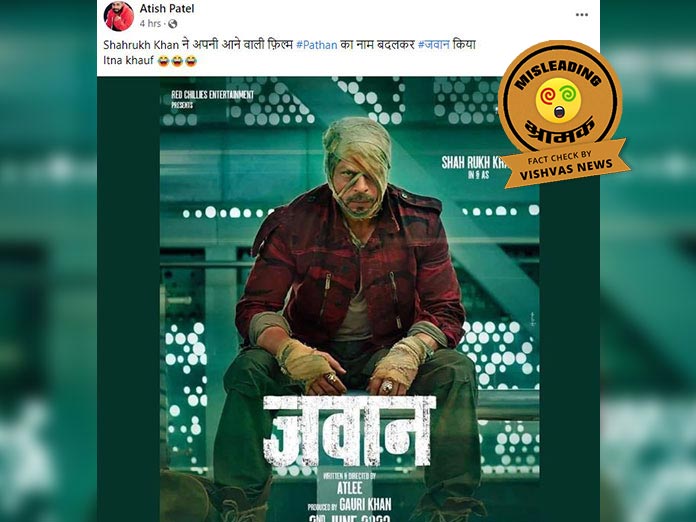 Vishvas News first searched the viral poster by uploading it to Google reverse image tool. We found the original poster of the movie ‘Jawaan’ on imbd.com. According to the information here, ”Jawan’ is a film by Shahrukh Khan that can be released on June 2, 2023.’

During our search, we found many news stories about the poster of ‘Jawan’. According to a news report on Jagran.com published on June 4, 2022, ‘the poster of Shahrukh Khan’s film Jawan has been released’. In the poster, Shahrukh Khan can be seen with bandages almost all over his face.

We also found the viral poster on Shah Rukh Khan’s Instagram account. This was posted on 4th June.

Vishvas News contacted Smita Srivastava, Senior Correspondent, Dainik Jagran, Mumbai to take the investigation further. She said, “there has been no change in the name of the film ‘Pathan’. She added, “This is just a rumor.”

We also contacted Shah Rukh Khan’s PR team. Calling it ‘nonsense’, they also confirmed that this post is fake.

At the end of the investigation, we scanned the profile of Facebook user Hindu Samaj Party. It was found that more than 20 thousand people follow this page. This page was created on 9th June 2019.