Fact Check: The school shown in this viral image is not from Delhi, but from Bihar 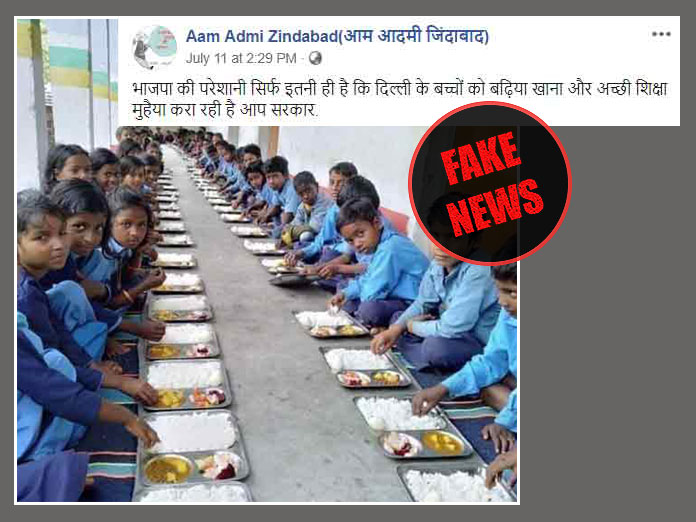 The Facebook page ‘Aam Admi Zindabad’ shared the post on July 11, 2019, at 2:29 PM that read: “The BJP has a problem that AAP government is giving good food and good education to the children of Delhi.”

Vishvas news started its investigation by performing a reverse image search of the viral image. We searched and found the same photo on the website samridhjharkhand.com. The image was uploaded three months ago with a text that read: बिहार के अररिया जिला के प्राथमिक विद्यालय छूरछूरिया की इस व्यवस्था से अन्य विद्यालयों को सीख लेनी चाहिए। (English: Other schools should learn from this system of Chhurchhuriya, an elementary school at Araria district of Bihar). Here is the image:

During our investigation, we also found a link on the website koshikiaas.com. The image had been uploaded April 19, 2019, with an article, which is now being used as a picture of the school in Delhi. In the article, it had been stated that: The government gives the same amount for the mid-day meal to the management committee of Chhurchhuriya Primary School in Araria district of Bihar like other primary schools. But, the management of the Chhurachhuriya School utilized the amount in the best possible way.

We further investigation and found a Facebook page of the Chhurchhuriya school, the elementary school in Araria district of Bihar. We found the pictures of the school on the Facebook page. We could see the viral photo on this page.

Vishvas News spoke to Ranjesh Singh, in-charge of Government Primary School, Chhurachhuria. He told us that the viral picture is that of their primary school. Some people are now spreading it on the name of Delhi.

We also scanned the social profile of the Facebook page which uploaded the photo which went viral. In our investigation, we found that more than 1.1 million users follow this page named Aam Admi Zindabad (@AlternativePolitics). This Facebook page was created on August 2, 2012.