Fact Check: This is not a real mermaid, this is an art made with the help of digital tools

Vishvas News investigated and found this claim to be false. The video going viral is actually made with the help of digital tools. 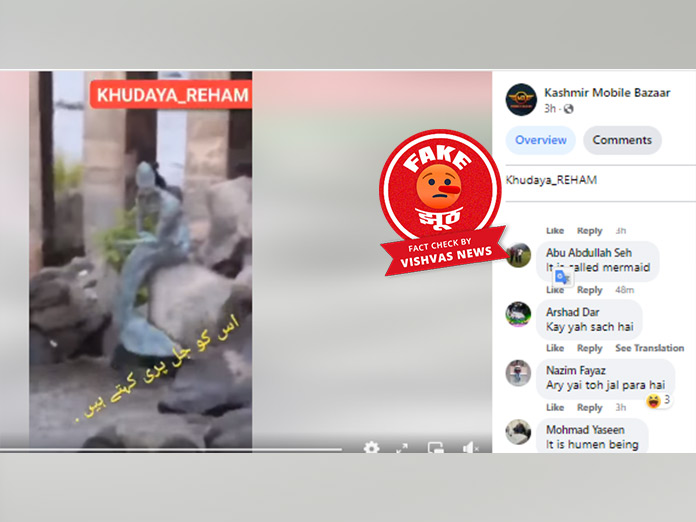 New Delhi (Vishvas News). A 22-second video is going viral on social media, in which a woman who looks like a fish can be seen sitting on a rock. It is being claimed with the post that it is a real mermaid. Vishvas News investigated and found this claim to be false. The video going viral is actually made with the help of digital tools.

Vishvas News searched the keyframes of this video on Google reverse image to know the truth of this post. We found this video on YouTube channel named ‘JJPD Productions’. The accompanying description read “Translated: We live in a world full of mysteries where we still don’t know what kind of creatures might exist, this time a strange creature was filmed on the shore of a lake, a kind of marine Creature, it was sitting on a rock, this creature with humanoid appearance, reminiscent of mythological sirens. Those mythical creatures that are related to legends, according to stories, these sirens with a hybrid aspect between human and fish is shown.”

The disclaimer written below the video read “These are paranormal videos made by us for entertainment. All images shown are fictional. The video is created with the help of CGI (Computer Generated Image).”

We reached out to JJPD Productions via Facebook Messenger regarding this. In response, we were told “This video was made using digital CGI tools. This is not a real mermaid.”

Taking the investigation further, we searched the Internet with keywords whether there was any news of any mermaid being sighted on any authentic news website or marine research website. We did not find any such news anywhere.

More than 44000 people follow the user Kashmir Mobile Bazaar, who shared the viral post with a false claim. The user is a resident of Kashmir.

Conclusion: Vishvas News investigated and found this claim to be false. The video going viral is actually made with the help of digital tools.