Fact Check: This is not a real skeleton, social media users are sharing digital art with the misleading claim

In our investigation we found this claim to be false. Actually, this skeleton is not real, but it was made by a digital artist. 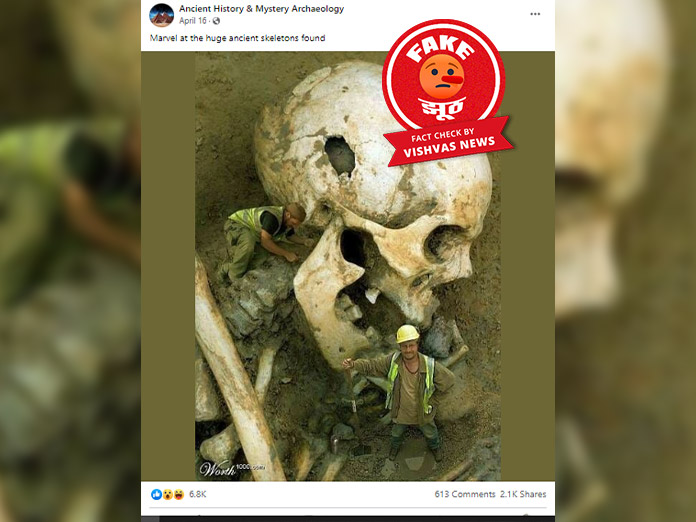 New Delhi (Vishvas News). A picture is going viral on social media in which the head of a large human skeleton can be seen. In the picture, 2 people can be seen standing with the skeleton. The post claims that it is a real skeleton found in an excavation. In our investigation, we found that this claim is false. Actually, this skeleton is not real, but it was made by an artist.

A large human skeleton can be seen in the viral photo ( Archive). There are also 2 people standing with the skeleton in the picture. The post claims that it is a real skeleton. The accompanying description reads “Marvel at the huge ancient skeletons found”

To investigate this post, we first searched this photo on Google reverse image. In this search, we found this photo posted on a blog named blog.designcrowd.com. According to this, this skeleton is actually an artwork created by an artist named Mzpresto.

We also found this photo on the website designcrowd.com. According to the information here, this picture had won the first prize in the digital art contest and was created by Mzpresto using Photoshop tools.

We went through Mazpresto’s profile and found out that he is a professional graphic designer and hails from the UK. Many graphic pictures can also be seen on his Facebook profile.

We contacted him through the mail and through Facebook messenger regarding this matter. In response, he told us that “the viral picture I made a long time ago for a digital contest. It’s not a real skeleton.”

We searched with the help of keywords whether any such large skeleton has been found in archaeological excavation anywhere in the world recently. We did not find any such news anywhere.

This post was shared by a Facebook page named Ancient History & Mystery Archaeology. The page has 33,701 followers.

Conclusion: In our investigation we found this claim to be false. Actually, this skeleton is not real, but it was made by a digital artist.