Fact Check: This picture of a golden snake is edited

Vishvas News found this claim to be false. The golden snake seen in the picture has been made with the help of digital tools. 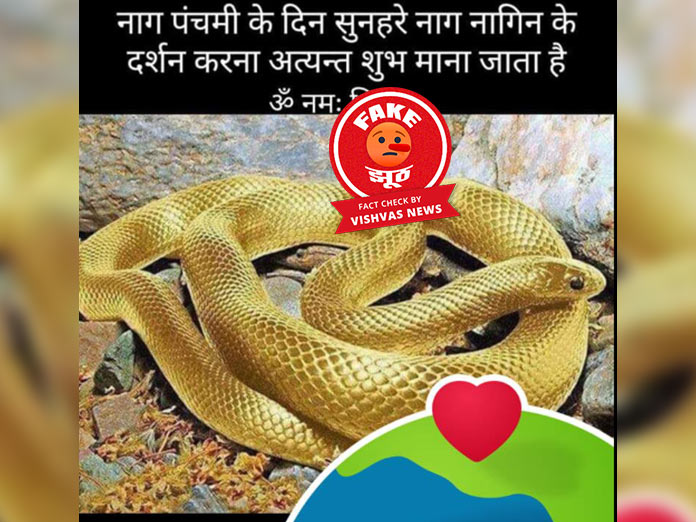 New Delhi (Vishvas News). A picture is going viral on social media, in which a golden-colored snake can be seen. It is being claimed in the post that it is a real golden snake. Vishvas News in its investigation found that this claim is false. The snake seen in the picture has been made with the help of digital tools.

A Facebook user (archive link) named Pradeepkumar Saroj shared this post. In the post it was written above the picture, “It is considered very auspicious to see the golden serpent on the day of Naag Panchami Om Namah Shivay, Real Image.”

We did reverse image search to check the picture. We found this photo on a website named designcrowd.com. According to the description here, this picture was created by a graphic designer named Mandarak for a competition called Alternate Materials: Gold.

We again did reverse image, but this time on Yandex. We found this picture on some websites including wattpad.com. But here the color of this snake was not golden, but black. According to the description everywhere, it is the Mexican Black King Snake.

We contacted V Deepak, PhD Fellow of Ophiology at the Senckenberg Research Institute in Germany, for confirmation. He said “Golden snakes are found in many parts of the world. The golden lancehead is one of such golden snake species. But the snake in the picture is the Mexican black king snake and this species is not found in golden color.”

We also shared this picture with editing and design expert Arun Kumar for confirmation. Arun told us, “This picture is edited. Zooming in the picture shows that the color is lighter on the edges. This is done while changing the color in any digital image so that it does not come out of the edges while filling the color and the subject looks real.”

On searching with keywords, we found many articles about golden snakes. These can be read here.

This picture was shared by a Facebook user named ‘Pushpendra Shakya’ with the wrong claim. According to the profile, the user is followed by 3,184 people.

Conclusion: Vishvas News found this claim to be false. The golden snake seen in the picture has been made with the help of digital tools.