Fact Check: This picture of a snake with wings is edited

Vishvas News found this post to be misleading. The snake with wings seen in the picture has been made with the help of digital tools. 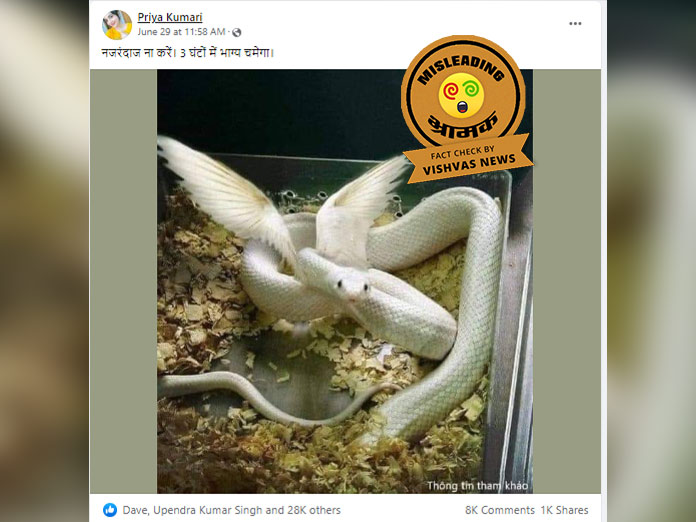 New Delhi (Vishvas News). A picture is going viral on social media, in which a snake with wings can be seen. People are sharing the post thinking it is a real snake with wings. Vishvas News in its investigation found that this post is misleading. The snake seen in the picture has been made with the help of digital tools.

We did a reverse image search to check the viral picture. We found this picture on a website named deviantart.com. According to the accompanying description, this is a digitally created image that was created for a computer graphic project. According to the information given here, the picture of the snake has been taken from a different website and the picture of the wings has been taken from a different website. Links to both these websites are also given here.

According to the website, this picture was created by graphic designer Yvonne Qiao. We found Yvonne’s website in which she described herself as a graphic designer. She is a Canadian of Chinese descent. We contacted Yvonne Qiao by mail and on Twitter. In response to the mail, she told us “Yes! The snake image was made by me for fun and uploaded onto DeviantArt as “photo manipulation”! It’s hard to believe people are spreading misinformation like this.”

We also contacted Urmila Ganguly, Professor of Zoology at Delhi University, regarding this. When asked about snakes with wings, she said, “There is no such species as a snake with wings. However, in 2017 scientists found fossils of a winged snake in Tennessee, USA. According to the research paper written on this topic, the remains are Millions of years old. But this snake species do not match any existing research. This picture is clearly edited.”

This picture was shared by a Facebook user named Priya Kumari with a misleading claim. According to the profile, 917,259 people follow user Priya Kumari on Facebook.

Conclusion: Vishvas News found this post to be misleading. The snake with wings seen in the picture has been made with the help of digital tools.