Fact Check: This policeman was not beaten in Surat, video from MP is going viral with wrong claim 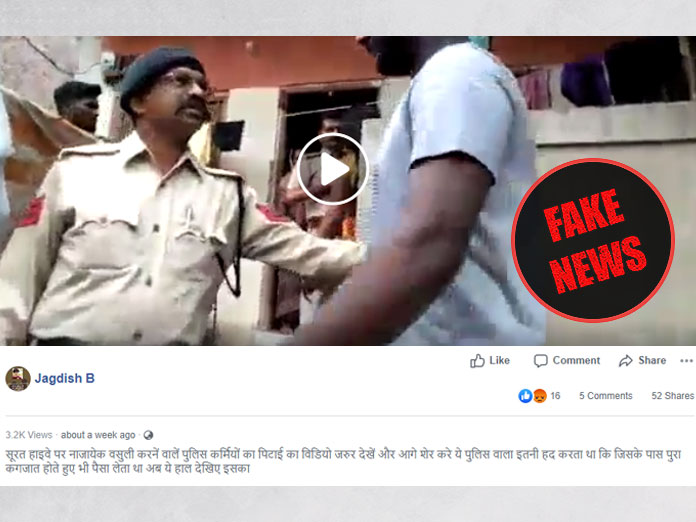 New Delhi (Team Vishvas). A video is going viral on social media in which some women can be seen beating a policeman on a street. It is being claimed that this policeman was beaten up for illegitimately demanding money from vendors on Surat Highway. In our investigation, we found that this claim is not true. Actually this video was shot in Maheshwar in Khargone district of Madhya Pradesh, when the Excise Department was informed that illegal liquor trade is going on in a house in Maheshwar. On this, the officials of the Excise Department along with the police force rushed to raid the house. After which this incident happened.

There is a video in the viral post, in which some women can be seen beating a policeman. The video description claims “Watch and share this video of policeman beaten up for illegitimately demanding money from vendors on Surat Highway.”

We found another version of this video in which this video was shot from another angle. Many vehicles can be seen in the video with number plate of MP (Madhya Pradesh).

To investigate this post, we inserted this video on the Invid tool and searched the key frames on Google reverse image with the keywords “women beat policeman”. In our search, we found a news of Times Now Hindi, which mentioned this incident. According to the news, ‘Khargone Excise Department was informed that liquor trade is going on in a house illegally. On this, the Excise Department officials rushed to raid the house with the police force, but when the Excise Department officials raided the house, they did not find liquor there. ’According to the news, the incident happened in Maheshwar area of Khargone in Madhya Pradesh.

We also got this news on the website of One India. The news was in a video format stating, “The police officer was beaten up by few women who went on a rampage over the illegal liquor business in ward number 8 of Maheshwar Nagar in Khargone district.”

This news was also published on Aaj Tak. This news report also confirmed that this incident took place in Madhya Pradesh.

For further confirmation, Jagran’s Khargone correspondent Vivek Vardhan Srivastava spoke to Sunil Kumar Pandey SP, Khargone (MP) who said: “On September 12, illegal liquor vendors attacked the police team during a raid operation at Maheshwar. Some women attacked the Excise Sub Inspector Mohan Lal Bhaiyal. This video is from there only. His service revolver and mobile were also robbed. Case has been registered against women involved.”

Conclusion: In our investigation, we found that this claim is incorrect. Actually, this video is not from Surat but from Maheshwar area of Madhya Pradesh. The Excise Department had received information that illegal liquor trade was going on in a house in Maheshwar. Exice officials arrived with the police force to raid the house. After which this incident happened.