FACT CHECK: This skeleton has not been excavated in Kurukshetra, Italian artists’ work is going viral with misleading claim 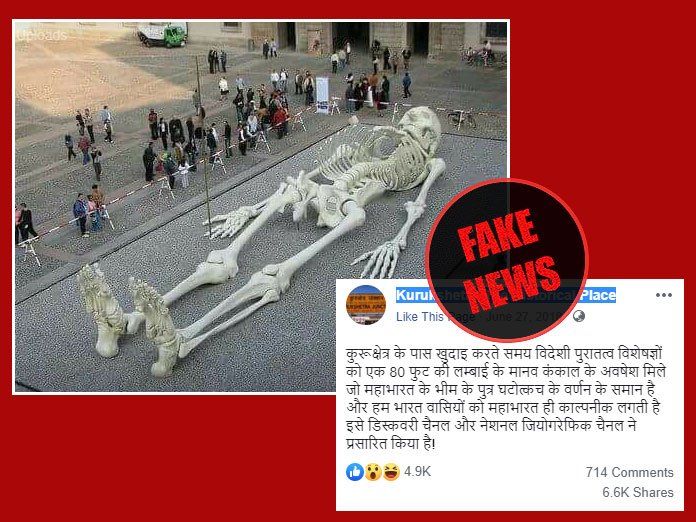 New Delhi (Vishvas Team).  A picture of a large skeleton is going viral on the social media. The post claims that this skeleton was excavated in Kurukshetra in Haryana. In our investigation we found that this claim is false. In fact, this skeleton is not even real, it is a sculpture. It was sculpted by Gino de Dominic, an Italian artist. This skeleton has nothing to do with Kurukshetra.

A large skeleton can be seen in the viral photo. Some people can be seen standing around the skeleton in the picture. In the post, it has been claimed that this skeleton was excavated in Kurukshetra, Haryana. The description reads “Archaeologists found a 80-feet long human skeleton which is similar to the description of Ghatotkach, the son of Bhima of Mahabharata.”

To investigate this post, we first searched this photo on Google Reverse Image and we found this photo on a website named theinspirationgrid.com. According to this website, this skeleton is actually a statue created by Gino de Dominicis, an Italian artist.

For more confirmation, we contacted the Department of Haryana Archeology and Museum where we were told that this picture is not of Kurukshetra.

We next called the Church of the Holy Trinity, Italy, where this skeleton statue has been kept. We were told that “this idol is the art of a sculptor Gino de Dominic, it has not been excavated from anywhere.” ‘Cosmic Magnet’ is a contemporary art piece of Gino de Dominicis. The statue is 24 meters long, 9 meters wide and four meters high”.

Conclusion: In our investigation we found that this claim is false. Actually this skeleton is not real, but it was created by Gino de Dominic, an Italian artist. This idol skeleton has nothing to do with Kurukshetra.