Fact Check: This video is not of Ram bhakts in Ayodhya to declare Hindu Rashtra

Vishvas News in its investigation found that the video shared with claims that Ram bhakts marched in Ayodhya declaring India as Hindu Rashtra is from Miraj, Maharashtra and from 2019 Navaratri celebrations. 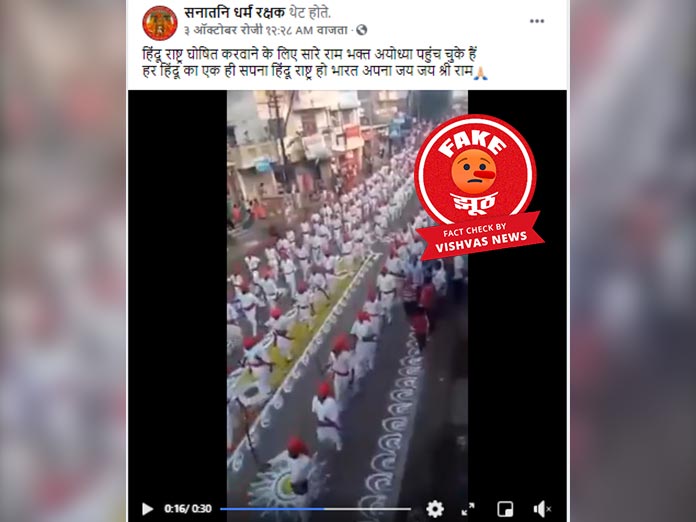 New Delhi (Vishvas News): A video is going viral on various social media platforms that claims that it is a video of Ram Devotees in Ayodhya to declare it as Hindu Rashtra.
One can see numerous people rallying over decorated streets, with various chants. Vishvas News in its investigation found that the video is from 2019 and from Miraj, Maharashtra, not Ayodhya.

Translation: Ram devotees have arrived in Ayodhya to declare a Hindu Rashtra.

Vishvas News first observed the video carefully. We checked if we could hear some familiar words associated with Ayodhya. However, the audio was not clear.

Later, instead of uploading the video on Invid tool, we ran a Google Reverse Image search multiple times, on every frame of the 30 seconds video. This lead us to a video uploaded on YouTube by Akshay Shinde on 27 October 2019.

We now used this caption as keywords and Facebook as search engine.

Through this we found the profile of Amit Shinde, who had uploaded the pictures of Durgamata Daud in Miraj and had also given picture credits to a photographer, Anup Shinde.

In the next step of investigation, Vishvas News then contacted the photographer, and shared the video with him over WhatsApp.

Anup Shinde confirmed over call that this video is from Navaratri celebrations in Miraj held in 2019.

In the last step of investigation we did a social background check of the Facebook user who shared the video. Vishvas News found that ‘सनातनि धर्मं रक्षक’ is liked by 1132 people and is followed by 1149 people.

Conclusion: Vishvas News in its investigation found that the video shared with claims that Ram bhakts marched in Ayodhya declaring India as Hindu Rashtra is from Miraj, Maharashtra and from 2019 Navaratri celebrations.