Fact Check: This video of a clash between fans is not from Asia Cup 2022

In the investigation of Vishvas News, the claim being made about the video of people fighting in the stadium turned out to be false. The viral video is of the year 2019. Which social media users are sharing as a recent incident. 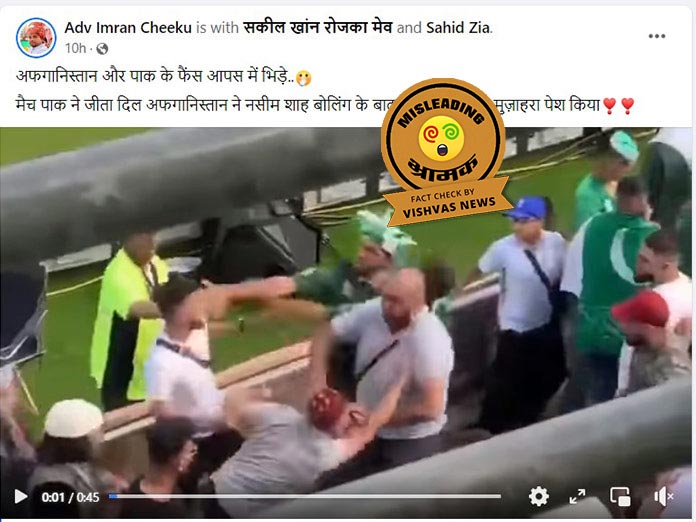 New Delhi (Vishvas News): Ugly scenes were witnessed at UAE’s stadium. After the Pakistan and Afghanistan cricket match, the fans of both the teams clashed with each other. Linking to this incident, a video is going viral on social media. Users are claiming that it shows a recent clash between the supporters of Afghanistan and Pakistan in Asia cup 2022.

The viral claim turned out to be false in the investigation of Vishvas News. The viral video is of the year 2019. Which social media users are sharing as a recent incident.

Facebook user Adv Imran Cheeku shared the video and wrote, “Fans of Afghanistan and Pakistan clashed with each other.”

We extracted several keyframes of the video and searched them with the help of Google reverse image. We found the viral video on a YouTube channel named HSE Murtaza. The video was uploaded on 30 June 2019. After which it is clear that this video is not of a recent incident.

Taking the investigation further, we started searching on Google with relevant keywords. We found a report related to the claim published on The Sun’s website in June 2019.

According to the report, “HATE-BRAWL OVER Shocking new footage emerges of Pakistan and Afghanistan fans brawling during Cricket World Cup.” Many other news websites also published this news.

During the search, we found similar videos shared in the year 2019 on several verified Twitter accounts.

For additional confirmation Vishvas News contacted Viplav Kumar of Jagran Sports Desk. We shared the viral video with them. He told us, “It is true that Afghan and Pakistani cricket fans clashed after the match. But this video is not of that fight. This video is very old.”

At the end of the investigation, Vishvas News did a social scanning of the fake post user Adv Imran Cheeku. From scanning we came to know that the user has 4929 friends. The user is a resident of Delhi.

Conclusion: In the investigation of Vishvas News, the claim being made about the video of people fighting in the stadium turned out to be false. The viral video is of the year 2019. Which social media users are sharing as a recent incident.