Fact Check: This video of a tornado during a baseball game is edited

Vishvas News investigated and found that the viral claim is fake. The video is edited and no such tornado struck during the actual match. 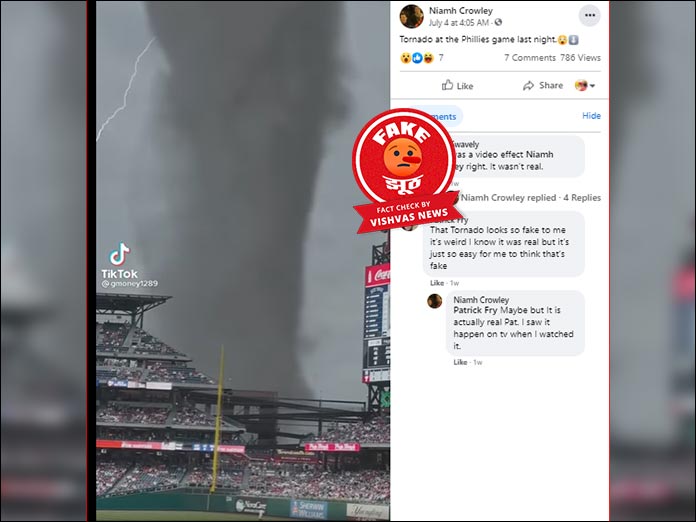 Vishvas News (New Delhi): A video is going viral on social media, in which a tornado can be seen passing from outside a ground during the match. As per the claim, a tornado struck outside when a Phillies baseball game was going on at Citizens Bank Park in Philadelphia. Vishvas News investigated and found that the viral claim is fake. The video is edited and no such tornado struck during the actual match.

Vishvas News searched on Google using appropriate keywords whether a tornado struck during a Phillies baseball game on July 3rd at Citizens Bank Park in Philadelphia. We could not find any such concrete information on any authentic media website.

While watching the video we saw that the name of a Tiktok user @gmoney1289 written on the video. There are restrictions on Tiktok in India. For this reason, we asked our foreign colleague to check @gmoney1289’s Tiktok. He told us that the user of the account @gmoney1289 is Greg Pietrantonio and that he regularly makes TikTok videos of tornadoes and alien attacks and posts them on his profile.

On searching about Greg Pietrantonio on the Internet, we found that he specializes in video editing.

We reached out to Greg Pietrantonio through email. He replied, “This video has been made using digital editing tools. It was made for entertainment purpose. I shot the original video during the game and then pasted the tornado into it using digital tools like Adobe.”

According to a YouTube news report from CBS News, a tornado hit Philadelphia on July 1. The report can be seen below.

We scanned the profile of the user ‘Niamh Crowley’ who shared the post on Facebook. On scanning the profile, we found that the user has hidden his information.

Conclusion: Vishvas News investigated and found that the viral claim is fake. The video is edited and no such tornado struck during the actual match.