Fact Check: This lion video is not from Gir in Gujarat, fake claim viral

Vishvas News checked the viral post and we came to know that the viral video has nothing to do with the Gir Wildlife Sanctuary in Gujarat. Chief Wildlife Conservator of Gir has told that the video is not from there. 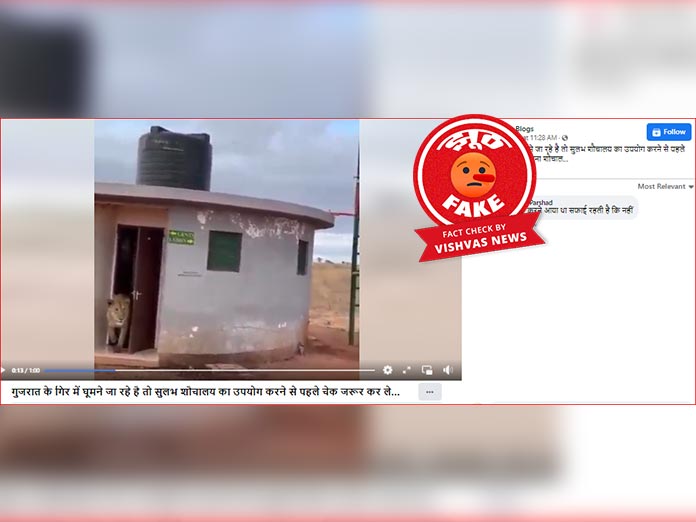 New Delhi (Vishvas News). A video of a lion is going viral on various social media platforms, in which the lion can be seen coming out of a toilet. Users are claiming that this was shot in Gir Wildlife Sanctuary of Gujarat. When Vishvas News checked the viral post, we came to know that the viral video has nothing to do with the Gir Wildlife Sanctuary in Gujarat. The Chief Wildlife Conservator of Gir has also rubbished the claim.

A user named Namo Blogs uploaded this video on Facebook and claimed, “If you are going to visit Gir in Gujarat, then definitely check before using the accessible toilet or else the toilet will not be used.”

Vishvas News first started searching for news and videos by typing related keywords in Google. We found a news article on republicworld.com. But the location of this incident was not mentioned in this article.

However, we found this video uploaded on Facebook in several places with the claim that it is from Tanzania’s Tarangire National Park. But no concrete evidence of this was found anywhere.

We have contacted Tanzania’s Tarangire National Park via email regarding this matter. This fact check will be updated as soon as their response is received.

Continuing the investigation, Vishvas News contacted Junagadh Wildlife (Sasangir) Chief Wildlife Conservator Dushyant Vasavada. He told that “The video of the lion coming out of the toilet in the forest is going viral for a long time. This is not from Sasan Gir forest in Gujarat. No toilets are designed like this in Gir forest. The lion looks African and not Asian. His face also looks a little different from the Asiatic lions. The color and hair of the lion also does not look like that of the Asiatic lions. There are no pukka toilets in the Gir forest, all temporary toilets are installed here.

At the end of the investigation, we investigated the user who posted the fake post. The Facebook page Namo Blogs has 49,523 followers.

Conclusion: Vishvas News checked the viral post and we came to know that the viral video has nothing to do with the Gir Wildlife Sanctuary in Gujarat. Chief Wildlife Conservator of Gir has told that the video is not from there.