Fact Check: This video of man on fire is not from Kannur Airport but from Morocco 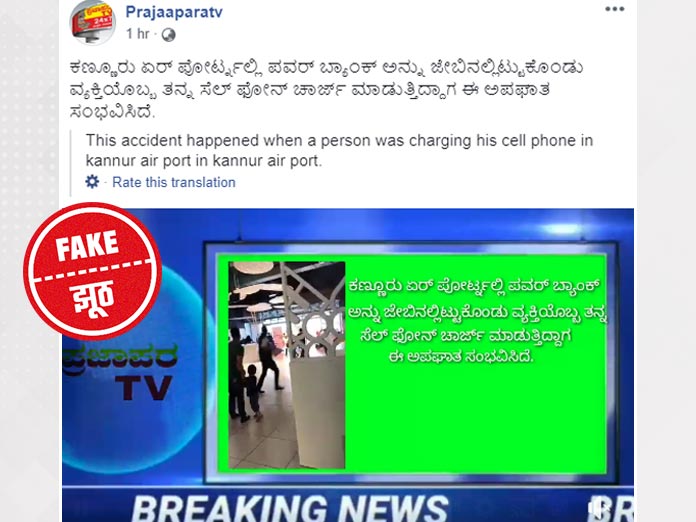 Vishvas News (New Delhi.) A video is going viral on social media in which a person can be seen covered in flames. It is being claimed that this video is from Kannur Airport and this person caught fire while charging his phone. We found in our investigation that this claim is false. Actually this video is from 2018, Morocco, when this person had set himself on fire at the gate of a supermarket.

To investigate this post, we first extracted the key frames of this video with the help of Invid tool and then did a Google reverse image search. We came across news filed by Morocco World News on 4 June 2018. According to this news story, a 31-year-old man had set himself on fire on June 3 in front of a super market in Rawat, Morocco. According to the news, this person was caught stealing from a shop and later in the evening this person came back and set himself on fire in front of this shop.

According to another news story published by Morocco World News on June 11 2018, the man later succumbed to his injuries.

We spoke to Kannur Airport Authority’s PRO Ajit Reddy for more confirmation. He said, “For a long time this video has been going viral in the name of Kannur Airport. The video is not from Kannur Airport. This claim is absolutely false. A statement and video against this fake news was also released by Kannur International Airport Limited on 23 March 2019 on its Facebook page. We urge people not to share this video in the wrong context. ”

We found this video released by Kannur International Airport Limited on facebook. The description of the video itself stated that this video is not from Kannur Airport.

Many people are sharing this video on social media. One of them is a Facebook account named Prajaaparatv. According to the page intro, this page is operated from Bengaluru.

Conclusion: In our investigation, we found that the viral video is not from Kannur but from Morocco. Second, this person did not catch fire while charging the phone, rather he had set himself on fire.