Fact Check: This video of the giant moon emerging from the sky is edited

In the investigation of Vishvas News, the viral claim turned out to be fake. The video has been made with the use of Computer Graphics. 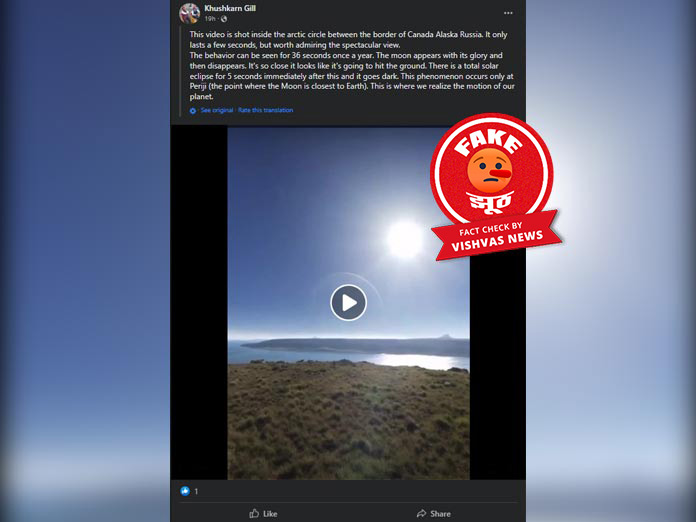 New Delhi (Vishvas News). In a video viral on social media, moon can be seen emerging and covering the Sun in a matter of seconds. The size of the moon seems exceptionally large. The viral post is claiming that ‘this video has been shot at the Arctic Circle between the border of Canada, Alaska, Russia. This phenomenon can be observed only once a year for 36 seconds. During this, there is a total solar eclipse for 5 seconds and there is darkness all over.’ The viral claim turned out to be false in the investigation of Vishvas News. The video is made by computer graphics.

Sharing the viral video, Facebook user Khushkarn Gill wrote, “this video was shot at the Arctic Circle between Canada Alaska Russia border. It only lasts a few seconds, but this spectacular sight is something to be admired. This phenomenon can be observed once a year for up to 36 seconds. The moon appears in all its glory and then disappears. It happens so close that it looks like it will hit Earth. This is immediately followed by a total solar eclipse and darkness for 5 seconds. This phenomenon occurs only at perigee (the point where the Moon is closest to the Earth). This is where we sense the motion of our planet.”

The archived version of this post can be viewed by clicking here. Many other users on social media are sharing it with a similar claims.

To know the veracity of the viral claim, Vishvas News took the screenshot of the viral video and searched the screenshot through Google reverse image search. We found the original video uploaded on 20 February 2022 on a website named nftb.io. nftb.io is an animation-making website. According to the information given with the video, this video has been made by graphic expert Aleksey Patrev.

Upon searching, we found this viral video on Aleksey Patrev’s YouTube channel. Taking the investigation further, we started checking Aleksey Patrev’s official Twitter account. We found a tweet related to the viral claim on May 30. In the tweet, Aleksey Patrev described this video as a work of graphic art.

An Instagram page named “seekersofthecosmos” also shared this video and credited Alexey for making the video. According to the information given on the social media accounts of Aleksey Patrev, He is a computer graphic artist who makes such digital arts and he is from Ukraine. Aleksey Patrev’s arts are present on many animation-making websites.

For more information, we contacted Aleksey Patrev via mail. Replying to the mail, Aleksey Patrev said, “the viral claim is fake. This video has been created using computer graphics.”

At the end of the investigation, we scanned the profile of the user who made the post viral. We found that the user is a resident of Muktsar in Punjab. 15 people follow the user on Facebook.

Conclusion: In the investigation of Vishvas News, the viral claim turned out to be fake. The video has been made with the use of Computer Graphics.