Fact Check: This viral news about the entry into Ayodhya Ram temple is fake

The claim of banning the entry of any particular caste in the Ram temple in Ayodhya is completely baseless and false. 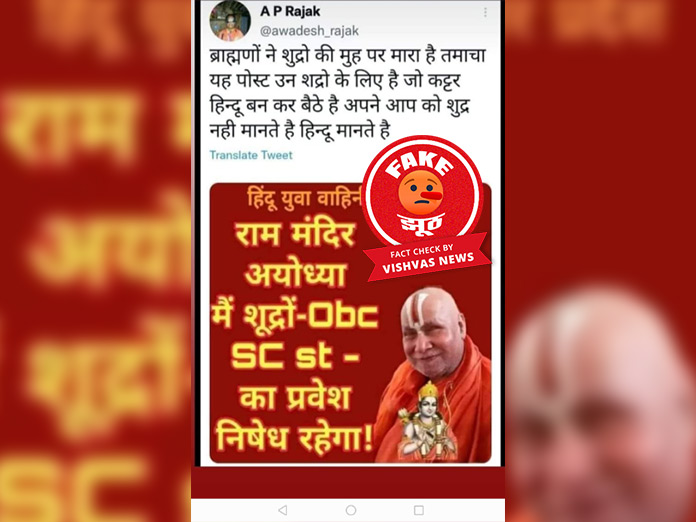 New Delhi (Vishvas News) Many posts are going viral on social media regarding the entry into the Ayodhya Ram temple. Vishvas News found a similar post for checking on its chatbot number +91 95992 99372. It is being claimed in this post that the entry of people of particular castes will be prohibited in the Ram Temple of Ayodhya. Vishvas News in its investigation found that this claim is completely baseless. There is no such restriction in the Ram Mandir of Ayodhya.

To investigate this post, we first resorted to keyword search. We could not find any information about any such announcement made by Hindu Yuva Vahini on any credible media website.

After this, we contacted Ramsharan Awasthi, Ayodhya Correspondent of Dainik Jagran. Terming this post as fake, he said, “People of all religions and castes are welcome in Ayodhya Ram temple. There is no restriction on people of any caste or religion to visit the temple.”

Since Hindu Yuva Vahini was quoted in the viral post, we got in touch with Pramod Mall, General Secretary, Hindu Yuva Vahini, Uttar Pradesh. He also rubbished the post and said, “Attempts are being made to disturb social harmony through such wrong posts. I request the public not to fall prey to such fake messages.”

Let us tell you that according to Article 17 of the Indian Constitution, no person can be forbidden to enter any place of worship open to other persons on the ground of untouchability.

This post was shared by a Facebook user named Jiaul Haque. The user is a resident of West Bengal.

Conclusion: The claim of banning the entry of any particular caste in the Ram temple in Ayodhya is completely baseless and false.