Fact Check: This viral picture is not of Mulayam Singh’s last rites

Conclusion: The post related to the funeral of Mulayam Singh Yadav proved to be misleading in the investigation of Vishwas News. The viral picture is not of his funeral. The person seen in the picture is Ashish Mishra, a senior journalist from Lucknow, who can be seen lighting his father’s pyre. 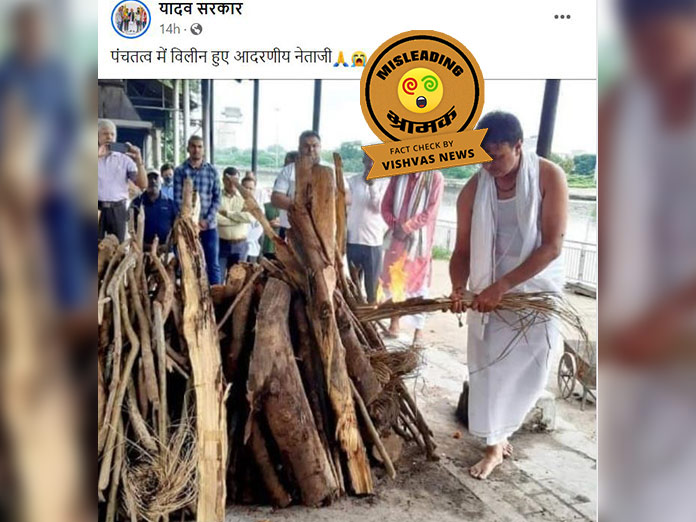 A picture is now viral on social media claiming that it is of Mulayam Singh’s funeral. Vishvas News investigated the viral post and found it to be misleading. The picture used in the viral post is of Lucknow-based senior journalist Ashish Mishra’s father’s last rites. This photo was posted by Ashish himself on his Facebook account. This picture has nothing to do with Mulayam Singh’s funeral.

Facebook user Yadav Sarkar, posting a picture on October 11, wrote that the respected Netaji merged with the five elements.

The claim of the viral post has been written here as it is. Assuming this to be true, other users are also making it viral. View its archived version here.

Vishvas News first used the Google reverse image tool to find out the veracity of the viral image. The original picture was found on the Facebook account of Ashish Mishra, a senior journalist from Lucknow, who posted it on October 11. Hundreds of people can be seen paying tribute in the comment section of this post.

On scanning this account, on October 11 at 8:16 am, another post of Ashish Mishra was found where he gives information about the death of his father. He wrote, “Respected people. My father, Shri Veer Vikram Bahadur Mishra, passed away yesterday at 5 pm. The last rites of Papa’s body will be held on October 11 at 11 am at Bhainsa Kund in Lucknow.”

Next, we investigated the Twitter handle of the Samajwadi Party. We found four pictures where Akhilesh Yadav can be seen wearing a white kurta-pyjama, a black Nehru jacket and a red cap on his head.

During the investigation, we found a video of Mulayam Singh Yadav’s last rites on the Twitter handle of journalist Piyush Rai. In this, Akhilesh Yadav can be seen giving fire to the pyre. Apart from this, it is clear from this video that the last rites of Mulayam Singh Yadav took place in the open ground, while the shed can be seen in the viral post.

Taking the investigation forward, Vishvas News contacted Dharmendra Pandey, UP in charge of Dainik Jagran Digital and shared the viral picture with him. He said, “Akhilesh Yadav is not in the picture. This is Ashish Mishra, a senior journalist from Lucknow. He can be seen paying tribute to the mortal remains of his father, senior journalist Late Veer Vikram Bahadur Mishra, at Baikunth Dham in Lucknow.”

Samajwadi Party national spokesperson Abdul Hafeez Gandhi was contacted for the next phase of the investigation. He also clarified, “Akhilesh Yadav is not in the viral picture. This picture is not of Mulayam Singh Yadav’s funeral.”

On scanning the social media post of the user, it was found that he is a resident of Sultanpur, UP and has more than 300 followers on Facebook.

Conclusion: Conclusion: The post related to the funeral of Mulayam Singh Yadav proved to be misleading in the investigation of Vishwas News. The viral picture is not of his funeral. The person seen in the picture is Ashish Mishra, a senior journalist from Lucknow, who can be seen lighting his father’s pyre.