Fact Check: This viral video is not related to Kashedi Tunnel, originally from kerala

In the investigation of Vishvas News, the viral claim about Mumbai Kashedi tunnel turned out misleading. Viral video of Kuthiran Tunnel in Kerala is being shared on social media with misleading claims. 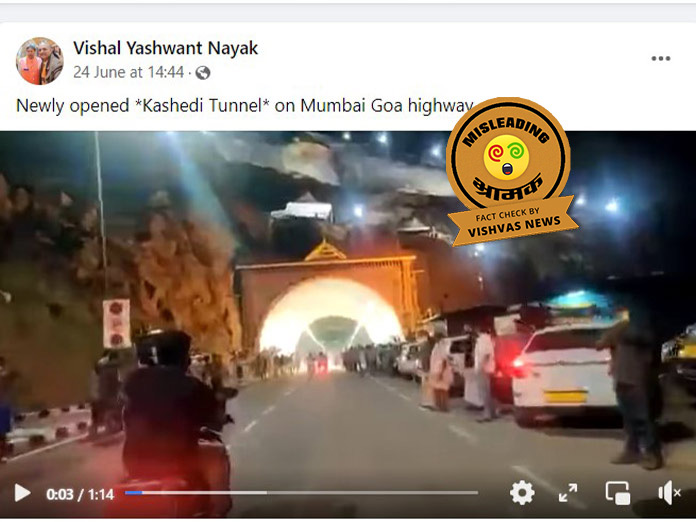 To know the truth of the viral video, we extracted several grabs of the video and searched them through Google reverse image. We found this video on a Twitter account named Indian Roadie. It was uploaded on 7 August 2021. Caption reads, KuthiranTunnel on #NH47 connecting Palakkad and Thrissur opened in early August 2021. #IndianRoadieInfrastructureProjects

On the basis of the information received, we searched on Google through some keywords. We got some pictures of this tunnel uploaded on the official Twitter handle of National Highways Authority of India (NHAI). Which is exactly like the tunnel seen in the viral video.

For more information, we reached out to journalist Jackson Gomez from Kerala. Shared the viral video with him. He told us that the video is from the Kuthiran Tunnel in Kerala. This tunnel connects Palakkad and Thrissur city.

Vishvas News, in the last phase of the investigation, conducted a background check on the profile that shared the viral post. We found that the user has 3,244 friends on Facebook. Vishal Yashwant Nayak is a resident of Mumbai.

Conclusion: In the investigation of Vishvas News, the viral claim about Mumbai Kashedi tunnel turned out misleading. Viral video of Kuthiran Tunnel in Kerala is being shared on social media with misleading claims.