Fact Check: Tweet about AMU and JNU going viral in the name of Sehwag is fake 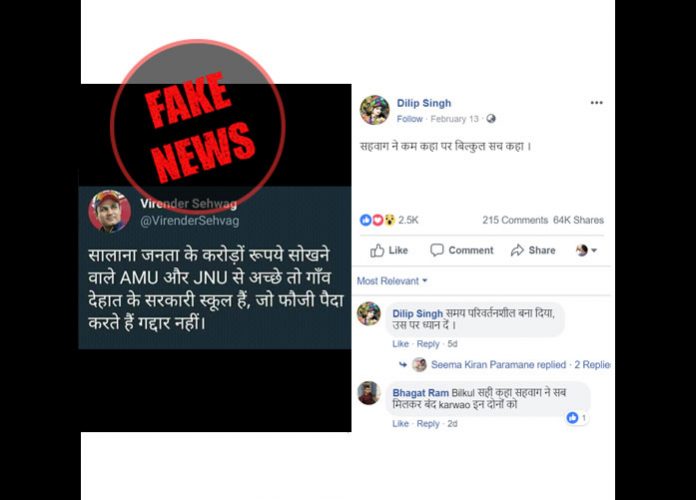 New Delhi (Team Vishvas) A fake tweet in the name of former Indian cricketer Virender Sehwag is going viral on social media. It is being claimed that Sehwag has targeted Aligarh Muslim University (AMU) and Jawaharlal Nehru University (JNU) in the post he tweeted. When Team Vishvas did an investigation, it found that this tweet was posted from a fake Twitter account. Sehwag has not posted this tweet from his Twitter account. Sehwag’s original and verified Twitter handle is @virendersehwag, and the viral tweet was posted from a handle named @VirenderSehvag.

The post that was allegedly shared on February 13 has already been shared 64000 times till now. A total of 215 people have commented on this post as well.

When the Team Vishvas searched the keywords of the viral post on Invid, we found that the content of this post was shared for the first time on May 8, 2018. Later, the post was shared in the name of Sehwag.

We did Stalkscan search of the Twitter account of Dilip Singh and found that the account had over 10,000 followers, but it doesn’t exis now. According to this account, the user lives in Jogbani area of Araria in Bihar.

Conclusion: The message going viral in the name of cricketer Virender Sehwag is fake. Sehwag never posted anything like this. The handle with which the post was tweeted has been deactivated.