The viral claim turned out to be false in the investigation of Vishvas News. Elon Musk is constantly active on Twitter. A screenshot of someone else’s Twitter account is being shared on social media with claim that Elon Musk’s Twitter account has been suspended. 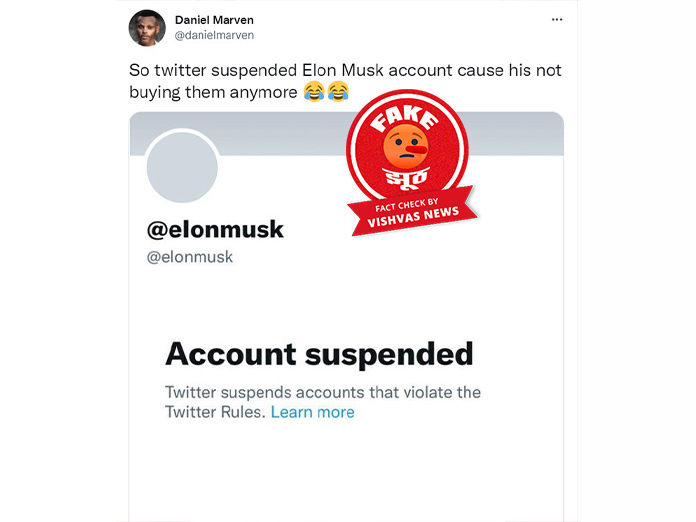 New Delhi (Vishvas News): Some social media users have been sharing screenshots purporting to show that Elon Musk account had been suspended. Users are claiming that Twitter did this because Elon Musk cancelled the deal with Twitter.

Vishvas News in its investigation found that this claim is completely baseless. Elon Musk is constantly active on Twitter. A screenshot of a fake Twitter account is being shared on social media with the wrong claim.

Twitter user Daniel Marwen posted a screenshot on his handle on July 10. Caption reads, ‘So twitter suspended Elon Musk account cause his not buying them anymore.’

Taking the investigation further, we started searching on Google through several keywords. We did not receive any credible media reports corroborating the viral claim. It is a matter of thought that Elon Musk is a famous personality. If Twitter had suspended his account after the cancellation of the deal, then there must have been some media report related to it.

For more details, we got in touch with social media expert Manish Pandey. They told us that the viral claim is false. The viral screenshot is of a fake account. The user made a slight change in the spelling to confuse people and created a fake account, so that people would think that this is the real account of Elon Musk and now people are sharing the fake and suspended account as the truth. By making a slight change in the spelling in the URL, people often run such fake accounts, which many people consider to be true.

At the end of the investigation, Vishvas News did a social scanning of Twitter user Daniel Marwen, who shared the fake post. From scanning, we came to know that the user is a resident of South Africa. Daniel Marwen is followed by 830.4K people.

Conclusion: The viral claim turned out to be false in the investigation of Vishvas News. Elon Musk is constantly active on Twitter. A screenshot of someone else’s Twitter account is being shared on social media with claim that Elon Musk’s Twitter account has been suspended.