Fact Check: UNESCO does not rank national anthem of any country, viral claim is false

Vishvas News in its investigation found that the viral claim about the Indian National Anthem is fake. The national anthem of any country is not ranked by UNESCO. 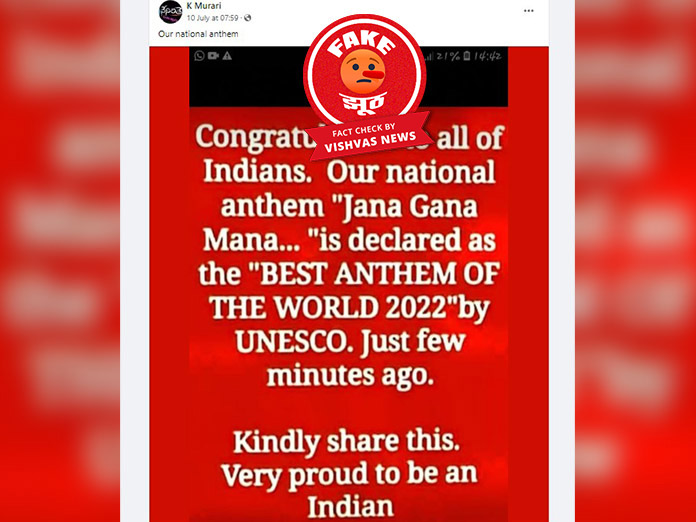 New Delhi (Vishvas Team): A text message is going viral again on various social media platforms that says, “UNESCO has declared the Indian national anthem as the best national anthem in the world.” Vishvas News in its investigation found that the viral claim to be fake. UNESCO has not made any such declaration. The national anthem of any country is not ranked by UNESCO.

Facebook user Pk Jangid shared the post on July 15. Caption reads, “Our national anthem – “Jana Gana Mana Adhinayak Jai Hey Bharat Bhagya Vidhata” has been declared as the best national anthem of the world.. UNESCO has declared it, as an Indian I am proud of it.. Jai hind, Bharat Mata ki Jai.”

Other social media users too are sharing the similar claims. The archive version of the post can be viewed by clicking here.

To know the truth of the viral claim, we took the help of Google Open Search. We started searching on Google with the help of related keywords, but we could not find any credible media reports related to the claim. If this news was true then there must have been some news report related to it. But we did not find any such report during the search.

Taking the investigation further, we started scanning UNESCO’s official website and social media handles. We could not find any information related to the viral claim even here.

For more information we contacted the UNESCO office in Delhi. They told us that the viral claim is false. UNESCO does not rank national anthems. No such survey or ranking is done by us. The national anthem is a way for all countries to show their love for their country.

In the last step of the investigation, we did a background check of the user who shared the post, Pk Jangid. We found that the user has 759 friends on Facebook. According to the information given on the profile, the user is a resident of Jodhpur city.

Conclusion: Vishvas News in its investigation found that the viral claim about the Indian National Anthem is fake. The national anthem of any country is not ranked by UNESCO.