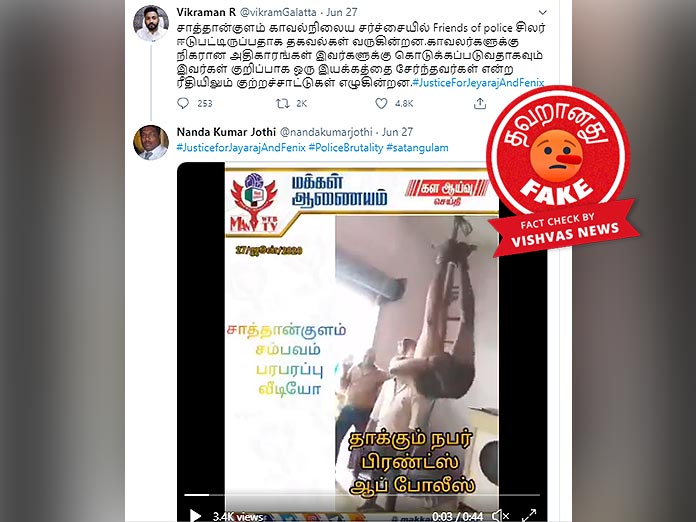 A viral video on social media claims the attack against two men, P Jayaraj and his son J Bennicks by friends of police. They died on 22 June 2020, of alleged custodial torture after they were arrested for lockdown violations at Sathankulam of Tuticorin district in Tamil Nadu.
Vishvas news found the video first on twitter with around 3,300 views. Further investigation revealed that the video claiming to be of the Sathankulam incident is fake and is a clipping from an old incident occurred in 2019.

A viral video on social media claims the attack against two men, P Jayaraj and his son J Bennicks by friends of police at Sathankulam of Tuticorin district in Tamil Nadu. The video shows a man in underpants, hung with a rope tied to the room ceiling and being beaten up with sticks. The video also shows the attacker, inserting a rod in the man’s private parts. The archived post of video can be accessed here.

When we searched on the Internet using key terms, we found the video is not of the recent incident, but of a different incident happened in July 2019 in Nagpur, Maharashtra.

According to a news article by Dainik Bhaskar, the transport businessmen brutally beat a truck driver in their office and attempted murder in Wadhamana area of Wadi police station. The accused had tied the driver to a ceiling and hung him upside down. They had also inserted a rod into his private parts.

Two men were arrested for allegedly torturing a driver in Nagpur after the video went viral, according to the Times of India.

When we searched further to find the authenticity of the video, we also found it on Nagpur today news website, where the incident about the article was published in July, last year.

We also found the video on Youtube, which was published in July 2019.

With timeline of the incident matching, we could conclude that the video is not of the recent incident happened in Sathankulam.

Speaking to Vishvas News, Inspector Rajendra Liladhar Pathak, Wadi police station confirmed that they have filed a case against the accused and arrests have been made. He confirmed the alleged incident in the video to have taken place in Nagpur, Maharashtra.

Conclusion: The video claiming to be of the Sathankulam incident is fake and is a clipping from an old incident occurred in 2019.