Fact Check: Video of clash between coca farmers and police in Bolivia is falsely being shared as one from J&K

In the investigation of Vishwas News, the viral claim about the video of stone pelting turned out to be misleading. The viral video has nothing to do with Kashmir. The video is from the Bolivian city of La Paz. 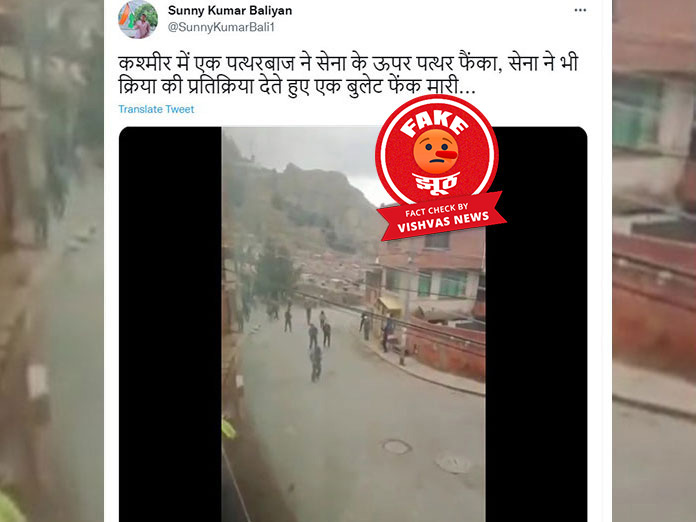 New Delhi (Vishvas News): A video of stone pelting is viral on social media with the claim that the Indian Army shot down a stone pelter on the spot when he threw stones on an Army convoy. This incident happened in Kashmir. The viral claim turned out to be misleading in the investigation of Vishvas News.

The viral video has nothing to do with Kashmir. The video is from the Bolivian city of La Paz.

Twitter user Sunny Kumar Baliyan shared this viral video and wrote in Hindi, “A stone pelter threw a stone at the army in Kashmir, the army also fired a bullet in response to the action of the stone pelter.”

You can check the archive version here.

We extracted several keyframes of the video using the InVid tool and searched them using Google reverse image. We found the same video on a YouTube channel named Al rojo vivo. The video was uploaded on 10 August 2022. According to the caption, this video is from Bolivia. In Bolivia, there was a conflict between coffee seed producers and the authorities. During this confrontation, a protesting farmer tried to throw a bomb at the police and by mistake the bomb exploded in his own hand. Due to which he was injured seriously.

Taking the investigation further, we started searching on Google with related keywords. We found many media reports related to the viral video.

According to a report published on the Redbolivision website, on August 8, 2022, coca farmers were protesting against market control in the Bolivian city of La Paz. During this, a bomb was accidentally detonated in the hands of a protester. According to local Bolivian media F10 HD-BOLIVIA, the man lost his left hand in the explosion. The name of the person injured in this accident is Placido Kota. You can see other news reports here.

For additional confirmation, we contacted Dainik Jagran’s Kashmir correspondent Naveen Nawaz. He told us, “The viral claim is false. This video is not from Kashmir.”

In the last step, we did social scanning of the user who shared the viral claim, Sunny Kumar Baliyan. From scanning, we came to know that the user is followed by 361 people and the user has been active on Twitter since July 2016.

Conclusion: In the investigation of Vishwas News, the viral claim about the video of stone pelting turned out to be misleading. The viral video has nothing to do with Kashmir. The video is from the Bolivian city of La Paz.