A video going viral with the claim of a series of suicide bombings outside Kabul airport is of Israeli airstrikes in the Gaza Strip. The video is falsely linked to the attacks outside the Kabul airport. 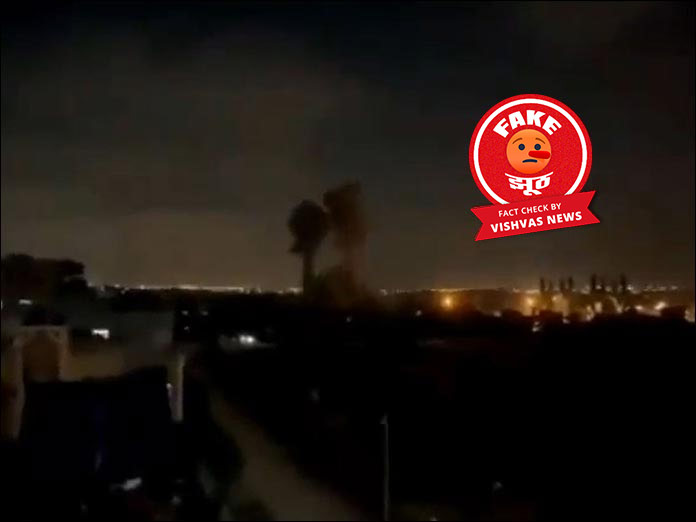 New Delhi (Vishvas News): After the Taliban seized control over Afghanistan, various countries are running a campaign to evacuate their citizens safely through Kabul Airport. Targeting this campaign, there was an explosion outside the airport on August 26th, in which more than 100 people were killed. After this attack, a video went viral on social media with a claim that it is related to the bomb blast outside the airport.

Vishvas News investigated and found the claim to be fake. The video going viral is not of the blast outside the Kabul airport, but an old video of the Israeli plane attack on the Gaza Strip, which is being linked to the blast in Kabul.

Several other users have shared this video with similar claims.

Vishvas News performed the Google reverse image search of the keyframes of the viral video that we obtained using the InVID tool. We found a video bulletin uploaded on the official YouTube channel of ‘AFP News Agency’ dated May 17, 2021. The video going viral is a part of this video.

According to the information given in the video bulletin, ‘Israeli warplanes carried out airstrikes targeting many different areas of the Gaza Strip.’

The viral video can also be seen in the report published on the website of 7news.com.au on May 17, 2021. According to the report, Israel carried out airstrikes targeting Hamas in the Gaza Strip and tunnels used by Palestinian terrorists.

According to the information given with the tweet, this video is a video of the Israeli airstrike in the Gaza Strip.

The video can also be seen on the verified Facebook page of Mint Press News. According to the information given, this video is of an Israeli airstrike on the Gaza Strip.

That is, the video going viral is not of the attack outside Kabul Airport, but of Israeli airstrikes in several areas of the Gaza Strip.

According to the news agency Reuters, on August 26, 2021, there was an explosion in Kabul Airport, in which more than 70 people, including 13 American soldiers, were killed.

13 US soldiers and hundreds of Afghan civilians were killed in a series of suicide bombings outside Kabul airport, the News Agency AP reported.

The person who shared the viral video, in his description on Facebook, stated that he is a resident of Jodhpur. More than 150 people follow this profile on Facebook.

Conclusion: A video going viral with the claim of a series of suicide bombings outside Kabul airport is of Israeli airstrikes in the Gaza Strip. The video is falsely linked to the attacks outside the Kabul airport.