Viral video of musical water fountain being shared as from Nagpur is from Bagh-E-Bahu musical fountain show in Jammu. 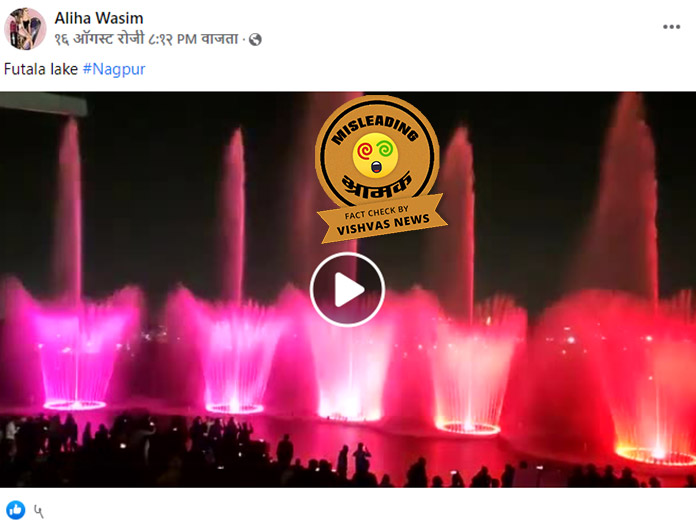 New Delhi (Vishvas News): Vishvas News came across a video being widely shared on Facebook, which claimed that is was from Futala lake, Nagpur. In the investigation however it was found that the video is from Jammu and not Nagpur.

Vishvas News started its investigation by uploading the video in InVid tool and ran an image search using Google Lens on every keyframe obtained through it.

We found a video posted on YouTube on February 16, 2022, which had the similar light show in a lake on the same song. The video was posted by channel ‘Travelling Keeda’. Description said, ‘Jammu meh pehli baar Musical fountain show in bage-bahu’.
It mentioned that the video was from Jammu. After first 10 minutes the visuals are similar to that of the viral video.

We also found the exact video on other Facebook profiles.

Reasi News Updates too shared it on 13th February.

And Jk Peoples voice too shared it on 13 February.

All the channels mentioned that this was from Bagh-E-Bahu in Jammu.

In the next step of investigation we shared the video with ANI correspondent of Nagpur, Saurabh Joshi. He confirmed that the video is not from Nagpur.

In the next step we contacted, Naveen Nawaz, Dainik Jagran’s editor from Kashmir.
He said that the video was from Bagh-E-Bahu in Jammu.

In the last step of investigation Vishvas News did a social background check of the user who shared it. Aliha Wasim is followed by 28 people.

Conclusion: Viral video of musical water fountain being shared as from Nagpur is from Bagh-E-Bahu musical fountain show in Jammu.