Vishvas News investigated the viral video and found that the incident is not from Bareilly, Uttar Pradesh, but from Rajasthan. There was no communal angle in the incident. 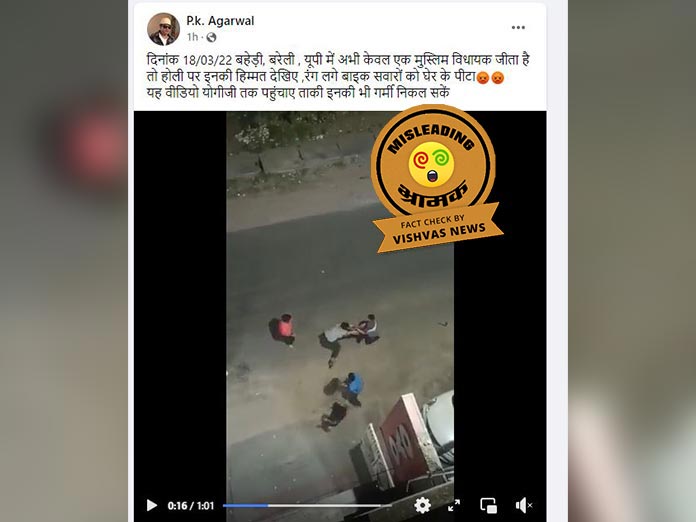 New Delhi (Vishvas News). A video of a clash between two groups is going viral on social media with a communal angle. In the video, two groups are seen fighting with each other. Meanwhile, a boy tries to run away by riding a bike, in which some people shout and attack him with a stick. The attackers repeatedly hit him on the head with a frying pan, and the boy fainted there.

It is being claimed with the post that Muslims in Bareilly attacked Hindus on the day of Holi. Vishvas News found in its investigation that this claim is not true. These visuals are not from Bareilly, Uttar Pradesh but from Jaipur, Rajasthan and there was no communal angle in the incident.

Facebook user P.K. Agarwal posted this video and wrote, “On 18/03/22 Baheri, Bareilly, in UP, only one Muslim MLA has won, so look at their courage on Holi. They beat up colored bike riders. Please send this video to Yogiji so that these people learn a lesson.

To know the truth of the viral video, we searched on Google through some keywords. We found a video report related to the viral claim uploaded on the official YouTube channel of Zee News Rajasthan on 16 March 2022. According to the report, this incident is not from Uttar Pradesh, but from Jaipur, Rajasthan.

According to the report published by Dainik Jagran on 16 March 2022, this incident happened on 14 March in Vaishali Nagar area of Jaipur. The name of the bike rider was Vishal Yadav. Vishal along with some of his friends had gone to celebrate his birthday party at a hotel in Vaishali Nagar on the night of 13 March. But in the meantime, Vishal and his friends got into an argument with the hotel staff. Soon the argument turned into a fight.

During investigation, we found a tweet related to the viral claim posted on the official Twitter account of UP Police Fact Check on March 21, 2022. Caption read, “#FactCheck – Viral video is not related to Uttar Pradesh but from Vaishali Nagar, District Jaipur, Rajasthan. The misleading post has been denied by @bareillypolice. Please don’t spread rumors by posting misleading information without verification.”

For more details we contacted SHO Hira Lal Saini of Vaishali Nagar police station. He told us that this incident did not happen on the day of Holi, but on the night of March 13-14. There was no communal angle in this incident. Both the parties in the incident were from Hindu religion. All the nine accused have been arrested.

In the social scanning of user, we found that the user is influenced by an ideology. He is followed by 786 people on Facebook.

Conclusion: Vishvas News investigated the viral video and found that the incident is not from Bareilly, Uttar Pradesh, but from Rajasthan. There was no communal angle in the incident.