Fact Check: Video of people drowning in flood water is from India, not Pakistan

The viral post proved to be misleading in the investigation of Vishvas News. Investigation revealed that the viral video is from 2011 and is from India, not Pakistan. The incident took place in Indore. 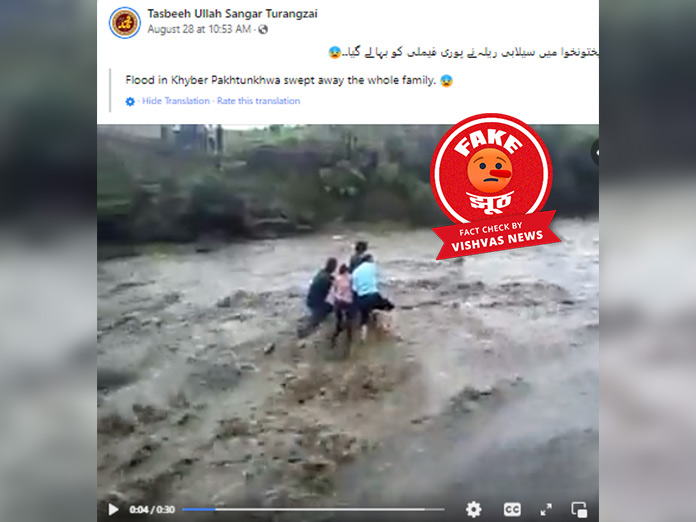 New Delhi (Vishvas News). A video is going viral on various platforms of social media. In this, some people can be seen flowing in the current of heavy floods. Social media users are making this video viral by calling it from Pakistan.

Vishvas News investigated the viral post. Investigation revealed that the viral video is from 2011 and is from India. The incident took place in Indore.

Facebook user Tasbeeh Ullah Sangar Turangzai (Archive) claimed the video as being from Pakistan: ‘Floods swept away an entire family in Khyber Pakhtunkhwa.

Vishvas News searched the screengrabs of the viral video on Google reverse image. We found this video embedded in a 2011 news story of NDTV.com. According to the news, “Picnic turned into tragedy for a family in Indore. Five members of the same family got washed away in the waterfall due to sudden rise in water level due to floods caused by recent rains in Patalpani.”

We also found this full video uploaded on a YouTube channel named WildFilmsIndia in 2011. The description of the video read “Family swept away by raging flood in Indore”.

We found a piece of news about this 2011 incident in Indore in Indiatoday.in as well

We spoke to Rumani Ghosh, Indore Digital Desk Head, Indore about this topic. He also confirmed that the video is from Indore and is from 2011.

Let us tell you that the havoc of floods continues in the whole of Pakistan and videos of people who were hit by the floods are coming out from different parts of the neighboring country. More information about the floods in Pakistan can be read in these news of Jagran.

At the end of the investigation, the user who made the viral video of India as Pakistani was investigated. Facebook user Tasbeeh Ullah Sangar Turangzai has more than 9000 Facebook followers.

Conclusion: The viral post proved to be misleading in the investigation of Vishvas News. Investigation revealed that the viral video is from 2011 and is from India, not Pakistan. The incident took place in Indore.