Fact-check: An accident of Madhya Pradesh of an uncontrolled truck goes viral as that of Maharashtra 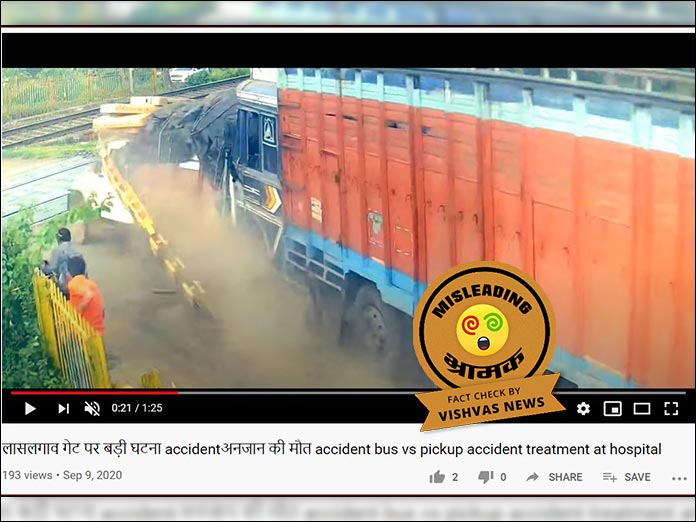 New Delhi (Vishvas News): A video is going viral on social media, where one can see an uncontrolled truck breaking the railway gate and crushed a lady. Users are claiming that the video is from Lasalgaon gate (Nashik, Maharashtra).

The video uploaded on YouTube was investigated by Vishvas News. We found out that this video is that of an accident that happened a few days back in Sagar district of Madhya Pradesh. This video is going viral claiming it to be from Maharashtra. Vishvas News in its investigation found the video to be misleading.

Claim:
The video of accident was uploaded on the YouTube channel named ‘Vaibhav Pawar /motha mahadev’, and it is being claimed that the video is from Maharashtra. The claim in the video says, “लासलगाव गेट पर बड़ी घटना accidentअनजान की मौत accident bus vs pickup accident treatment at hospital“
The video was uploaded on September 9, check the archive version of the video here.

Investigation:
Vishvas News first observed the viral video very closely. One can clearly see in the video, a truck crushing a woman after breaking the railway gate. Vishvas News took screen grabs of the video and then checked it using the Google Reverse Image Search. We found the video on the Navabharat Times website. We got the footage that is going viral on the internet. In the news it is mentioned that the accident happened in the Madhya Pradesh’s Sagar district at Khurai-Sagar Road on Gate Number 11 of Thakurbaba Jaurkheda. The news report was published on 3rd September 2020.

On the next step of the investigation we again took help from the Google Search. We used the necessary keywords and we found two news reports at Nai Dunia and Dainik Bhaskar website. The report published on 4th September on Nai Dunia tells that the accident happened on the railway gate number 11 at Sagar-Bina road where an uncontrolled truck collided with the railway gate and then hit a few vehicles after crushing a woman to death. A woman Nafisa died in the accident. You can read the complete report here.

In the last step of the investigation, we interacted with the bureau chief of Sagar situated Nai Dunia, Om Dwivedi. He told us that the accident in the viral video is that of 3rd September and that the incident took place in Sagar.