The viral claim that suddenly waking up from bed at night can cause heart failure and brain anaemia is untrue and has no scientific basis. Meanwhile, the viral claim is also credited to a bogus doctor whose existence is unknown otherwise. 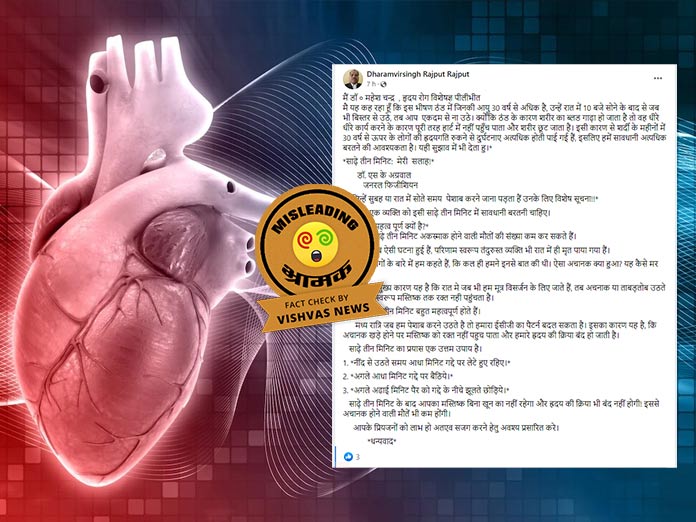 New Delhi (Vishvas News): 2022 saw a reported rise in many deaths in India due to sudden heart attacks. Unless one closely follows authentic medical news, there are bound to be misconceptions about the risk factors for heart disease or heart disease itself.

As shared by Harvard, here are ten commonly held but mistaken beliefs about heart attacks. Meanwhile, Vishvas News also debunked one viral post which claimed that suddenly waking up from bed at night after 10 pm can lead to heart failure. When we spoke to several experts, they dismissed the claim as untrue with no scientific basis and confirmed that such posts only spread panic on social media. Meanwhile, the claim is also credited to a bogus doctor whose existence is unknown otherwise.

Facebook user Dharamvirsingh Rajput Rajput shared a viral claim which included misleading claims about how suddenly waking up in winter after 10 pm can lead to heart failure and brain anaemia. The archive link of the post can be found here.

An identical claim shared by Madhu Sudan Sen  (archive link) has been viral since 2016 on social media.

Vishvas News first searched the web for more information about the doctor mentioned in the post – Dr Mahesh Chandra from Pilibhit, and found his profile on JustDial. We contacted his assistant Dr Shashank on the given numbers, who informed us that the viral post should not be accredited to Dr Chandra as he has not shared any such claim.

Search results showed no other Dr Mahesh Chandras from Pilibhit.

Next, we segmented the claim into parts to understand the context. The first included the comment from the person impersonated to be Dr Mahesh Chandra.

Vishvas News initiated the verification by studying the connection between cold nights, thickening of the blood, change in ECG pattern, and heart attacks. A report in Medical News Today pointed out that people with existing cardiovascular conditions are at particularly high risk of heart attacks during cold weather.

To understand, Vishvas News contacted Dr Mukesh Goyal, Cardiac Surgeon at Apollo Hospital Delhi, who mentioned, “While some of the medical conditions in the claim do exist for people who are seriously ill, the publisher of the claim is making simplistic conclusions. This is general advice we have been giving patients, especially those on antihypertensive and prostate medicines. Also elderly and diabetics should follow it. There is nothing new in this viral post. There is also no connection to a heart attack. There can be occasional syncopal attack due to pooling of blood in legs if these patients don’t take appropriate care.”

As per American Heart Association, “Syncope is also called fainting or “passing out.” It often occurs when blood pressure is too low (hypotension) and the heart doesn’t pump enough oxygen to the brain. It can be harmless or a symptom of an underlying medical condition.”

He even questioned the part in the post which claimed that ECG patterns can also get changed due to the extreme cold and stated, “ECG is not affected. It may detect abnormal rhythms, but the pattern does not change when we wake up suddenly.”

Going further, Vishvas News analysed the 3-minute rule. After three and a half minutes, your brain will no longer be anaemic and your heart will not be weakened, reducing the risk of falling and sudden death; the misleading post also encouraged people to share the advice with family and friends.

Among the many comments, online users seemed to appreciate the ‘doctor’s advice’, with many describing it as ‘good advice’.

According to the Mayo Clinic report, dizziness or lightheadedness can also result from standing after sitting for a long time. There’s likely no cause for concern if these symptoms happen only occasionally.

Discussing the fainting part, Dr Rajiv Bajaj, a cardiologist at Batra Hospital, said, “Fainting is possible when passing urine and can lead to injury or unnecessary hospital visits, tests, scans etc. Such urine-related fainting is well-known to be commonest during the night. Avoiding alcohol is mentioned in medical books, but switching on the light to wake the brain and sitting on the ground before standing may also help increase blood circulation. Abnormal instructions by the sleepy brain to the heart cause this problem. During standing and passing urine, the BP and pulse should be kept up, but a sleepy brain may give opposite instructions to the heart and blood vessels leading to fainting. Dr Mahesh says blood thickens etc., but these are not the exact reasons. Ecg pattern context is also misleading; heart rate slow and BP low is the correct description.”

To get more clarification, Vishvas News also got in touch with Dr Edmond Fernandes, Founder of CHD Group & Director of Edward & Cynthia Institute of Public Health, who explained, “There is nothing like the anaemic brain in this context. The brain is not getting enough blood flow because the blood pressure doesn’t catch up quickly enough due to postural variation. The recommendation is to take a nice, slow sit-up and wait a second or two before starting the movement. Let’s say 30 seconds – three-and-a-half minutes is a random number.”

Similar posts on sudden death at night have been debunked several times previously; see examples here and here. Nevertheless, it is always advisable to consult your doctor and get the best advice from him/her in an emergency. Also, every government-authorised body will ask you to rush to a nearby hospital in an emergency; no amount of shares on a social media post can save a dear member.

On performing the social scan of the user, we found that he is self-employed and works as a CEO for Advocate at Advocates Inc. and is followed by 4.9K friends on Facebook.

Conclusion: The viral claim that suddenly waking up from bed at night can cause heart failure and brain anaemia is untrue and has no scientific basis. Meanwhile, the viral claim is also credited to a bogus doctor whose existence is unknown otherwise.