Fact check: Viral image of Subhas Chandra Bose reading the news of his own death is edited

Viral image claiming Subhas Chandra Bose read the news of his own death, is edited. Viral claim is false. 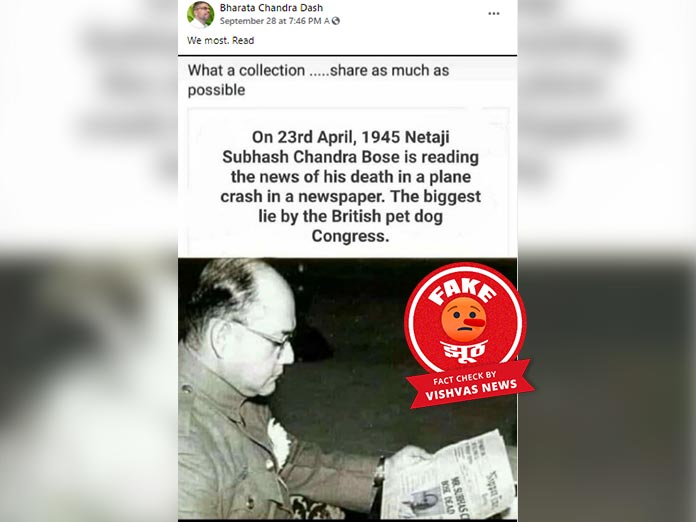 New Delhi (Vishvas News): Vishvas News came across a black and white picture of Subhas Chandra Bose doing rounds over various social media platforms, which claimed that the freedom fighter was reading the news of his own death in a plane crash, in the newspaper. Vishvas News in its investigated found that the image was edited.

Claim:
Facebook user, Bharata Chandra Dash posted a black and white photo, with the matter: What a collection…. share as much as possible

On 23rd April, 1945 Netaji Subhash Chandra Bose is reading the news of his death in a plane crash in a newspaper. The biggest lie by the British pet dog Congress.

Investigation:
Vishvas News did a simple Google Reverse Image Search on the picture. The search led us to the Twitter handle of Anuj Dhar.

If this picture is zoomed it can be seen, that the freedom fighter is not reading the news of his death, but some other news.

We also found the viral image on the Twitter profile of Anuj Dhar. The caption said: Original picture with some reimagination by
@BiplabC2

However, the account of @BiplabC2 was found to be suspended.

Vishvas News in the next step of investigation reached out to Ambarish Pundlik who has studies to his credit on Subhas Chandra Bose. He said, “This is a photoshoped image, which was prepared to explain that Netaji was alive when the news of air crash was carried by the Japanese. But the date of this plane crash is 18th August 1945 and not 23 April. There isn’t a single photograph of him available after 18th August 1945. The content on the newspaper Netaji is holding in the picture is edited.“

Vishvas News did a social background check on the Facebook user who shared the viral image. We found that the user Bharata Chandra Dash is a ‘journalist’ and is based in Balasore.

Conclusion: Viral image claiming Subhas Chandra Bose read the news of his own death, is edited. Viral claim is false.