Fact Check: Viral job vacancies in the name of Donyi Polo Airport and other Assam airports are fake

Several airport job vacancies posted on social media, related to the newly inaugurated Donyi Polo Airport in Arunachal Pradesh and other Assam airports, are fake and a scam. 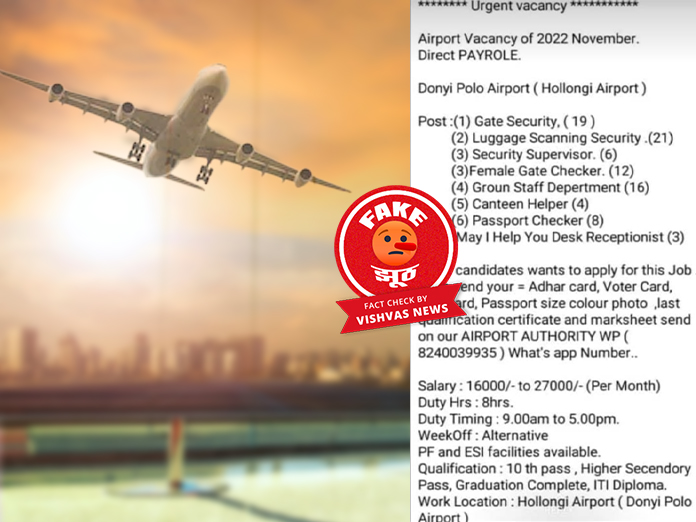 New Delhi (Vishvas News): Arunachal Pradesh’s world-class Donyi Polo Airport was inaugurated at Hollongi in Itanagar on November 19, 2022, while the first flight was flagged off from Itanagar to Mumbai via Kolkata on November 28, 2022. However, fake claims regarding Donyi Polo Airport job vacancies are already surfacing online. Similar claims are also circulating online for other Assam airports too.

Vishvas News, in its investigation, found such claims to be fake. Also, there were several discrepancies in the job notices circulating on social media. In these claims, people were asked to share their personal information on an unknown WhatsApp number, which is never the case with the Airport Authority of India (AAI) recruitment procedures.

Facebook user Suman Magria Nilling on November 8 shared a job notice, which was also shared on her cover story. The archive link of the post can be found here.

Vishvas News conducted a fact check on the viral post through Google Reverse Image Search and found many similar claims like this and this; some of the users who shared this post, however, also pointed out that these job vacancy posts are fake.

Several social media claims with the same content for other airports of Assam (Guwahati, Dibrugarh, Jorhat, Silchar, Lilabari, Tezpur) are viral. A few of these claims can be found here, here and here. These posts were majorly circulated in several job posting groups, mostly by Nisha Varman, Sunanda Saikia and Puja Biswas.

Many spelling mistakes were also visible in the below post, like Payrole (Payroll), Groun (Ground), Adhar (Aadhar), Secendory (Secondary)

The post also talks about a dedicated Airport Authority WhatsApp number. When Vishvas News tried reaching out to this WhatsApp number- 7365964213 – we received no response. Another number shared in a different post – 8240039935 – was also switched off.

Vishvas News, next, decided to explore the recruitment page of the AAI website, which directed us to a proper page with guided instructions about the job openings there. Please find them below:

Nowhere in any of the links was the mention of any WhatsApp number through which the details can be filled in, and the candidates can get selected.

Speaking to an AAI employee in Delhi, Yogesh Kadian, we were informed that such posts are always a scam and a way to mint money from the innocent public.

Next, we emailed Avinash Ranjan, Public Grievance Officer AAI, Donyi Polo Airport, Itanagar, at tm.veho@AAI.AERO. We soon received his reply – “it is to be informed that the attached JOB VACANCY Advertisement is absolutely FAKE and should not be followed at all.”

To conclude the investigation, Vishvas News finally got in touch with Gian Batra, General Manager, Human Resources, AAI Corporate Headquarters, who confirmed, “Any recruitment news of AAI goes through the website and gets published in newspapers.”

On social scanning of the social media user, we found that Suman Magria Nilling has 27 friends on Facebook.

Conclusion: Several airport job vacancies posted on social media, related to the newly inaugurated Donyi Polo Airport in Arunachal Pradesh and other Assam airports, are fake and a scam.