The viral news clipping is misleading; it is from 2020 and the charge was never levied by Varanasi Municipal Corporation on Ganga Arti and priests at the city ghats. 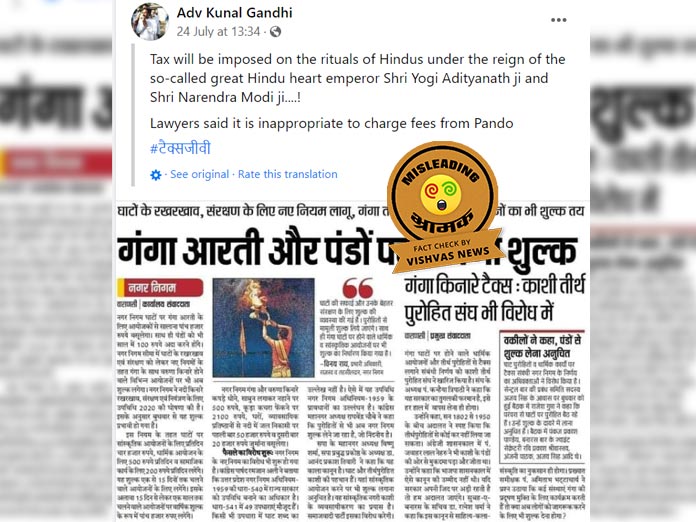 New Delhi (Vishvas News): A viral newspaper clip talking about Varanasi Municipal Corporation levying taxes on Ganga Aarti and on priests is making rounds on social media. It is being claimed that the charges will be levied soon to maintain Varanasi river ghats.

However, Vishvas News investigated and found this claim to be misleading. The viral newspaper clip is from 2020 and the taxes were never levied by Varanasi Municipal Corporation after facing resentment and protest from the people in the region.

Facebook user ‘Ad Kunal Gandhi’ who has around 1.1K followers shared the newspaper clipping on July 24, 2022 which soon started making rounds on social media. The description read “Tax will be imposed on the rituals of Hindus under the reign of the so-called great Hindu heart emperor Shri Yogi Adityanath ji and Shri Narendra Modi ji….! Lawyers said it is inappropriate to charge fees from Pando.”

The archive link of the post can be found here . The clipping was also circulated widely on Twitter; two of the many posts can be seen here and here.

Vishvas News searched the keyframes of the picture on Google reverse image to know the truth of this clip. We found several similar pictures, on Facebook and Twitter, which went viral in 2020.

On further research, we found the same picture to be circulating again and came across ‘Ad Kunal Gandhi’ Facebook account (dated April 24, 2022) where the same post was reshared by 52 followers.

To get insight, we first spoke to Sandeep Tripathi, News Hours, Varanasi Bureau Head, who said, “This news is two years old. Then there was talk of levying fees on ghat priests, ghat events and aarti of Kashi including Prayagraj, but the order was cancelled the very next day. At present there is no such fee, it is just a mere rumour.”

Taking the investigation further, we also contacted Dr. Neelkanth Tiwari, Member of Legislative Assembly, Varanasi South UP, who protested against the idea of levying taxes on Ganga Aarti and the priests in Varanasi. Clarifying, he said, “No such charges have ever been levied till date.”

To get to the depth of the story, we also contacted Varanasi Municipal Corporation officials. Refuting the claims, Amit Shukla, Assistant Municipal Commissioner said, “This news clipping is many years old. We have not levied any such charge. Such misleading posts on social media bring a bad name to us.”

The post is shared on Facebook by a user named Adv Kunal Gandhi. When we scanned the social profile of the user, we found that the user is based out of Dhampur, Uttar Pradesh, as stated in his profile.

Conclusion: The viral news clipping is misleading; it is from 2020 and the charge was never levied by Varanasi Municipal Corporation on Ganga Arti and priests at the city ghats.