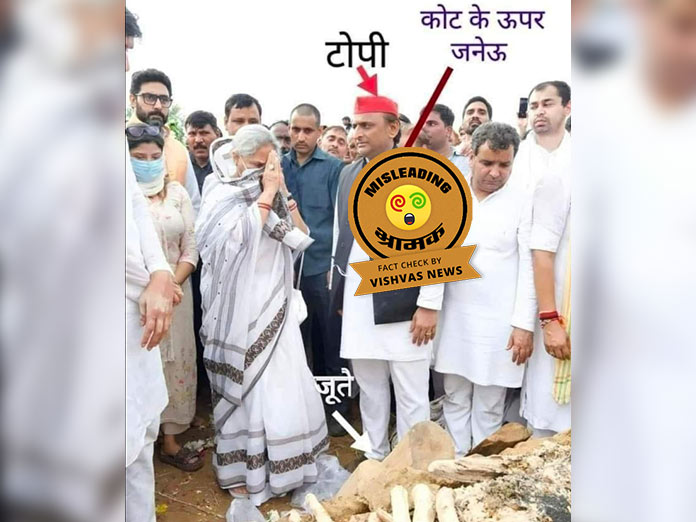 New Delhi (Vishvas News): Samajwadi Party supremo Mulayam Singh Yadav passed away on October 10, 2022, and his cremation was performed by his son Akhilesh Yadav on October 11 with full state honours. Now, a post viral on social media claims that Akhilesh was wearing shoes while lighting the pyre, which is against Hindu customs and traditions. The post also slammed the national president of the Samajwadi Party for wearing the sacred thread (Janeu) over his coat and a cap (topi) on his head.

Vishvas News, however, found the claims to be misleading as he can be seen wearing black socks during the entire ceremony. Though Akhilesh did have his cap on during the funeral, his black socks have been mistaken for shoes.

The archive link can be found here.

A Google Reverse Search Image took Vishvas News to various links of The Quint, Amarujala, and ABP. All these links carried pictures of eminent personalities who went to Saifai to pay their respects to Mulayam Singh Yadav. However, Akhilesh’s feet were not visible there. After zooming in, we could not get a glimpse of any shoes but noticed a foot covered in black cloth that seemed like socks.

Next, we scanned the official Twitter handle of the Samajwadi Party, which also shared pictures of Akhilesh Yadav performing the rites in black socks.

On being contacted by Vishvas News, the President of the Maharashtra state branch of the Samajwadi Party, Abu Asim Azmi, said, “I was with Akhilesh Ji during the ceremony, he was wearing black socks and no shoes. The claims viral on social media are fake.”

He also shared a picture with us, which shows him performing the final rites with Akhilesh Yadav.

Thus, it is evident that the viral claim about Akhilesh Yadav wearing shoes during his father’s funeral is misleading.

On social scanning, we found that the user who shared the viral post, is from Haridwar, and has 221 followers on Facebook.