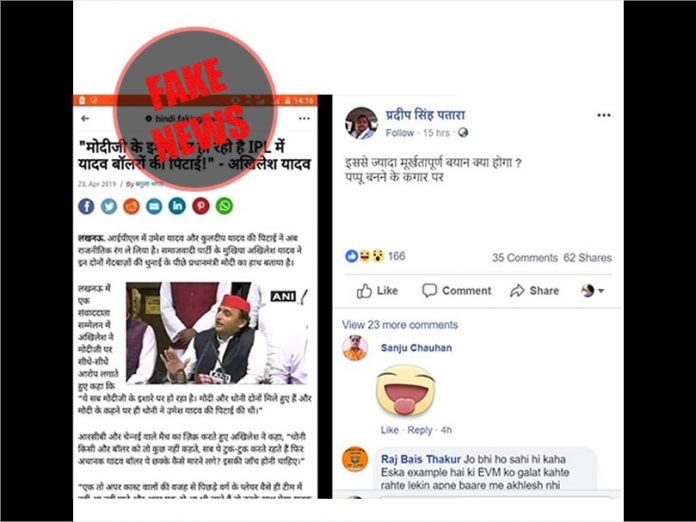 A photo is doing rounds on social media showing a satire piece claiming that former Uttar Pradesh chief minister AkhileshYadav has blamed Prime Minister NarendraModi for thrashing Yadav Bowlers in IPL cricket league. Vishvas News team found in its investigation that the claim is false and that the viral photo is misleading.

A photo of a satire piece is going viral on Facebook claiming that AkhileshYadav made a statement blaming NarendraModi for thrashing Yadav bowlers in IPL. The photo is shared by the user named Pradeep Singh Pataara. It was revealed during the investigation that the viral photo is fake.

Vishvas News team investigated the claim and found that the photo is fake.

As we can see, there is one link above the photo, hindi.fakingnews.com. The website fakingnews.com is an Indian news satire website that publishes fake news reports containing satire on politics and society of India. When we visited the website we found the disclaimer on the website “Content of this website is a work of fiction. Readers are advised not to confuse the “news reports” of Faking News as being genuine and true.”

We also visited the Facebook page of the website and in the “About” section we found the following description “Faking News is the leading Indian news satire and humor website. It contains cutting edge satire on political and social scenario of India. The website publishes fake news reports with incisive sarcasm, satire, and humor.”

We also checked the byline from which the article was posted “BagulaBhagat”. The articles we reviewed by the author are fake.

The user also commented on the photo which clearly states he himself is not sure whether the claim is true.

We searched the profile of the user on Stalkscan and found many misleading posts on his profile.