Fact Check: Viral Picture of Protests Against CAA In 2019 Passed Off As Long Jam In Delhi Due To Farmer Agitation 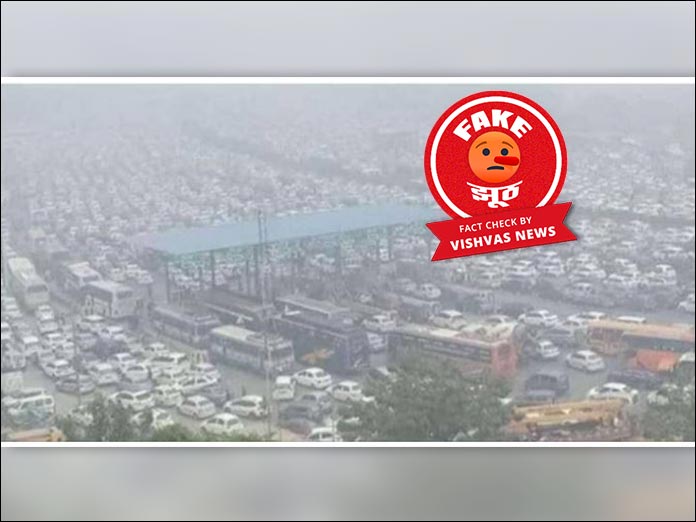 New Delhi (Vishvas News): A picture going viral on social media claims to be from the recent farmers’ protest demanding the withdrawal of agricultural laws. A long jam can be seen on the roads in the viral picture and it is being claimed that the current farmers protest resulted in 80 km long jam in Delhi.

Vishvas News investigated and found the claims to be false. The picture of the traffic jam being linked to the farmer’s agitation going viral is actually from a protest against the Citizenship Amendment Act (CAA) in Delhi last year. It is now being shared with the fake claim.

Many users have shared the picture with similar claims on social media.

Vishvas News performed Google reverse image search of the photo to check the authenticity of the claim.

During our search, we found the picture in the video bulletin uploaded on December 19, 2019, on the Facebook page of TV news channel ‘Times Now’.

According to the information provided with the video bulletin, the picture is of a fierce traffic jam caused by the protests against the Citizenship Amendment Act (CAA). The jam was on the Gurugram border due to the barricading of the Delhi Police, whose other pictures can be seen in the video bulletin.

To confirm, we performed the reverse image search once again with the appropriate keywords and we found the same picture used in many news reports. This picture has been used in the report published on 19 December 2019 on Dainik Jagran’s website.

According to the report, ‘Delhi-Gurugram border has been severely jammed due to the protests against the Citizenship Amendment Bill (now law).’

Vishvas News contacted three correspondents of Dainik Jagran, who are covering farmers’ protests at different places. Sonu Rana, a reporter covering in the Indus border, Ashish Gupta reporting on farmers’ performance in the Delhi-UP border and senior reporter Shujauddin confirmed that the viral picture is not related to the performance of the current farmers protest.

The user who shared the viral post is the resident of Agra in Uttar Pradesh as per his profile description.

Conclusion: Vishvas News investigated and found the claim in the viral post to be false. The picture of the traffic jam being linked to the farmer’s agitation going viral is actually from a protest against the Citizenship Amendment Act (CAA) in Delhi last year. It is now being shared with fake claim.