Fact Check: Viral picture shared as Buddha of Bamiyan in Afghanistan, is from Kanheri Caves, Mumbai

Image going viral as Buddha of Bamiyan being restored by Taliban government in Afghanistan is from Kanheri caves in Mumbai, Maharashtra. 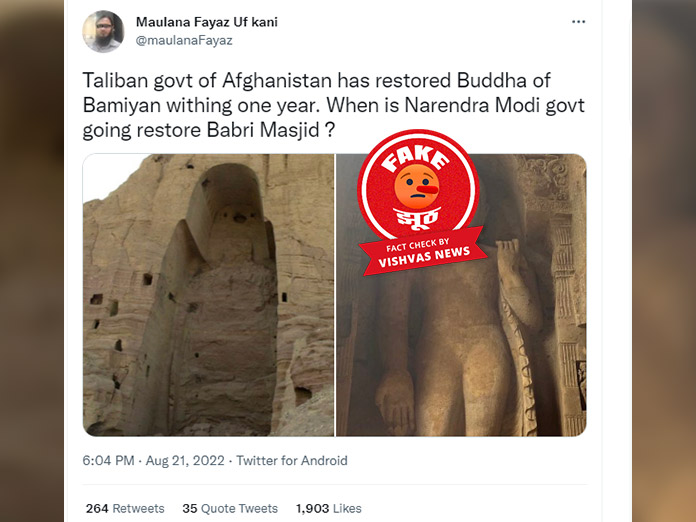 Vishvas News (New Delhi): Vishvas News came across a viral claim stating that Taliban govt of Afghanistan has restored Buddha of Bamiyan with in one year. Bamiyan Buddhas were carved out of a stony cliffside in central Afghanistan’s Bamyan Valley in the sixth century AD and stood around 180 feet tall for 1,400 years, until the Taliban blew them up with heavy explosives in 2001, just before the US invasion ended their brief reign over Afghanistan.
Vishvas News in its investigation found out that the viral picture of Buddha in the post is from Kanheri caves in Mumbai and not from Bamyan valley in Afghanistan.

The first images was indeed that of Buddha of Bamiyan.

We found an article on the history of Afghanistan’s Bamiyan Buddhas.
The article said: The two colossal Bamiyan Buddhas stood as arguably the most important archaeological site in Afghanistan for well over a thousand years. They were the largest standing Buddha figures in the world. Then, in a matter of days in the spring of 2001, members of the Taliban destroyed the Buddha images carved into a cliff face in the Bamiyan Valley.

United Nations too had commented on this destruction by Taliban.

We also found the images on getty images website.

We ran a Google reverse image search on the second image.

We found the image on a website, which had pictures from Kanheri caves and Sanjay Gandhi National Park.

We also found the image on the wikipedia page of Sanjay Gandhi National Park, stating that the 7 m tall Buddha statue is at the entrance of the largest Kanheri cave.

We found the image on shutterstock.com a stock images website.

It was hence clear that the second image is from Kanheri caves in Mumbai.

We then checked if, Taliban govt of Afghanistan have restored Buddha of Bamiyan. We did not find any such media reports.

We then checked through location tag on Instagram, to check if people have posted this sculpture of Buddha in Kanheri caves.

We found pictures of Instagram users posing in front of the Buddha statue.

In the next step of investigation we connected with senior journalist from Mumbai, Mayur Parikh who is a frequent visitor of Kanheri caves. He confirmed that the image is from Kanheri caves, Mumbai.

Another visual arts student from Mumbai, Nagesh Kanade too confirmed that the viral image was from Kanheri caves, Mumbai.

In the last step of investigation, Vishvas News did a social background check of the Twitter user who posted the viral picture.

We came to know that Maulana Fayaz Uf Kani joined Twitter in November 2020 and he is followed by 5,022 people, while he follows no one.

Conclusion: Image going viral as Buddha of Bamiyan being restored by Taliban government in Afghanistan is from Kanheri caves in Mumbai, Maharashtra.