The post claiming the cycle girl Jyoti was raped and strangled to death is fake. 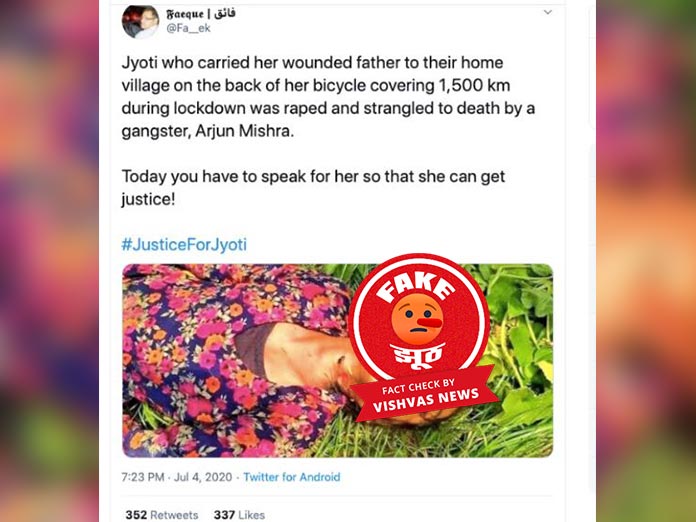 A viral post on social media claims Jyoti, who carried her wounded father to their home village by peddling on her bicycle over 1200 Km during lockdown was raped and strangled to death. Vishvas news spotted the claim first on Twitter. When we searched, we also found it on Facebook. Our investigation revealed that the deceased girl is not the ‘bicycle girl’ Jyoti Kumari.

A viral post on social media claims Jyoti, who carried her wounded father to their home village on the back of her bicycle covering over 1500 Km during lockdown was raped and strangled to death by a gangster, Arjun Mishra. We also found several pictures of the ‘bicycle girl’ Jyoti Kumari circulated along with pictures of a deceased girl on facebook. The archived post can be accessed here.

When we searched on the Internet for recent rape incident in Bihar, we found news reports on death of a teenager in Darbhanga district.

According to the news report in the Times of India, A 14-year-old girl was allegedly raped and murdered for stealing mangoes from an orchard at Pataur village under Ashok Paper Mill police station.

A body of a teenager was found in a suspicious condition in the Patore OP area, where the family members have registered an FIR under rape and murder charges against former soldier Arjun Mishra, his wife Poonam Devi and Harisundar Mishra, according to the Hindustan.

We also found a video of the deceased girl’s father Ashok Paswan seeking justice for his daughter.

With access to a video of cycle girl Jyoti and her father Mohan Paswan, we could conclude that the deceased girl was not the bicycle girl, but another girl in the same locality with similar surname as hers.

For further confirmation on this subject, we spoke to Dainik Jagran’s Darbhanga reporter Vibhash Jha. Jha contacted Babu Ram, SSP of Darbhanga, who said “Social media is full of news about the murder of the cycle girl Jyoti. This is fake news. Cycle girl Jyoti is completely healthy and safe. A girl murdered at Pathor, five days ago. One man has been arrested in this case.”

He clarified that the postmortem report of the deceased girl shows she was electrocuted. The rape charge has not been confirmed.

“Selfish elements are trying to spoil the social harmony by spreading rumors. Avoid such rumors, and make others aware too. An FIR has been lodged in the Kamatoul police station by the girl’s father in connection with the dissemination of false news and misuse of the name of a minor girl. Legal action will be taken soon in this regard. Also, the news printed in mainstream media can be consulted. Trust verified news only,” said the SSP.

National Crime Investigation Bureau post have also clarified that the deceased girl is not bicycle Jyoti.

Conclusion: The post claiming the cycle girl Jyoti was raped and strangled to death is fake.