A viral post purporting to be AAP’s Gujarati manifesto, especially for minorities, is doing rounds on social media. Vishvas News, in its investigation, found it to be fake and created falsely ahead of the election results that are set to come out on December 8. 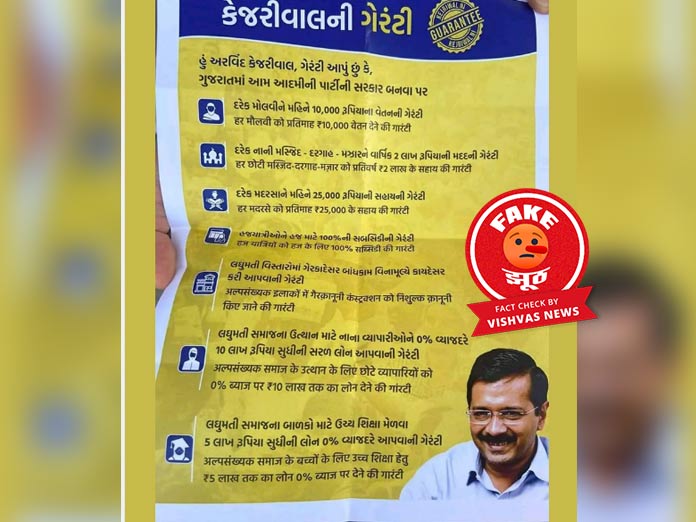 New Delhi (Vishvas News): Polling in the first phase of the Gujarat elections 2022 was held on December 1. 89 of the total 182 Assembly seats went to polls, with the remaining 93 going to polls in the second phase of polling to be held on December 5. Votes will be counted on December 8.

Amidst polling in Gujarat, various posts related to elections are going viral on social media. One such post purports to be AAP’s Gujarati manifesto, especially for minorities and is making rounds on social media.

Vishvas News, in its investigation, found it to be fake and created to malign the party’s image in the state ahead of the election results.

Facebook user Dilip Kashyap on December 1 posted, “Gujarat election manifesto of AAP party’s supremo Honorable Kejriwal Ji, read every point carefully and decide what will be the direction and condition of the country? #Arvind_Kejriwal is the son of an i*********e father.”

Next, we explored AAP’s social media pages and found this Facebook post on the party’s Gujarat-verified handle.

To confirm, Vishvas News got in touch with Jivan Kapuriya, Associate Editor, Gujarati Jagran, who shared this link with us. Tweeted by AAP Gujarat’s verified handle on November 29, 2022, this post reads ‘Beware of lies of BJP’ and shows the difference between original and fake guarantee cards.

Below is the English translation of the fake and original pointers in the guarantee cards.

Original
– Like Delhi-Punjab, 24 hours electricity will be given in Gujarat. Old bills will be waived off
– Will give employment to every unemployed. Rs 3000 employment allowance will be given if employment is not available.
– Every woman above 18 years of age will be given a Rs 1000 honorarium every month
– Government schools will be made modern. Will ban the fee hike of private schools
– Good health facilities will be given free of cost to every citizen. Will make good hospitals
– Free Chardham to the elders of Gujarat
– Without giving bribes in the government department, your work will be done, and corruption will end
– Will give one crore to the family members of the martyr

Finally, we got in touch with Dr. Safin, AAP Gujarat Social Media and IT in-charge, who said, “It is absolutely fake. We have also filed a complaint in the EC commission against this.” He also shared a copy of the complaint filed with the EC.

We performed social scanning of the profile of the user who shared the viral photo and found that the user has 4.6K friends on Facebook and the post was shared by 6 other people.

Conclusion: A viral post purporting to be AAP’s Gujarati manifesto, especially for minorities, is doing rounds on social media. Vishvas News, in its investigation, found it to be fake and created falsely ahead of the election results that are set to come out on December 8.