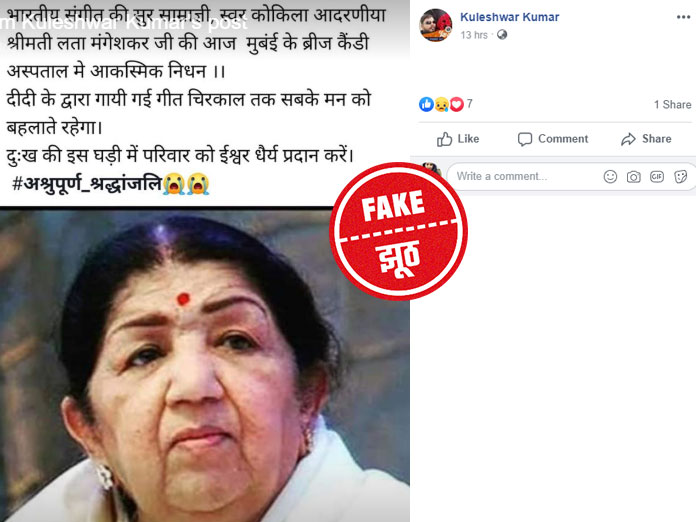 On November 11, the veteran singer Lata Mangeshkar was admitted to the Intensive Care Unit (ICU) of Mumbai’s Breach Candy Hospital after she complained of breathing problems. Ever since the news of her being hospitalized, on one hand, her fans have been praying for her speedy recovery and on other hand the fake news purveyors are spreading hoaxes related to her health. In the recent viral post on Facebook, it has been claimed that Lata Mangeskar passed away. The post read: “The greatest singer of the world, Lata Mangeshkar passes away. May the soul of the daughter of mother India rest in peace.” Vishvas News investigated and found the viral post is fake.

A post shared on Facebook by a user named Kuleshwar Kumar reads: “The greatest singer of the world, Lata Mangeshkar passes away. May God give courage to the family in this tough time.”

We started our investigation by searching about the viral claim on the internet. The post is also shared by multiple users on Facebook.

Vishvas News started its investigation by speaking to the family member of Lata Mangeshkar. We spoke to her niece Rachana Shah on Nov 15, 2019, at 11:10 am. She said: “Lata Mangeshkar is doing fine. We are happy that she is recovering. Thank you for supporting us. If this viral post on social media was true, we, her family members wouldn’t be taking the calls and weren’t so happy.”

A tweet was also shared from the official Twitter handle of Lata Mangeshkar. It read, “Lata didi is stable..and recovering…We thank each one of you, for your concern, care and prayers!”

We also found a tweet from the official Twitter handle of ace filmmaker Madhur Bhandarkar. “Just spoke to the family. #LataMangeshkar Tai is stable and recovering. My humble request, not to spread baseless rumours and pray for @mangeshkarlata speedy recovery,” he tweeted.

The post has been shared on Facebook by a user named Kuleshwar Kumar. We scanned the social profile of the user and found that the user hails from Ranchi Jharkhand.

Viral posts on Facebook claiming the death of the legendary singer Lata Mangeshkar are baseless.