The viral image of the CNN headline stating that climate change is seasonal and will be back next year is fabricated and fake. The American news channel published no such headline. 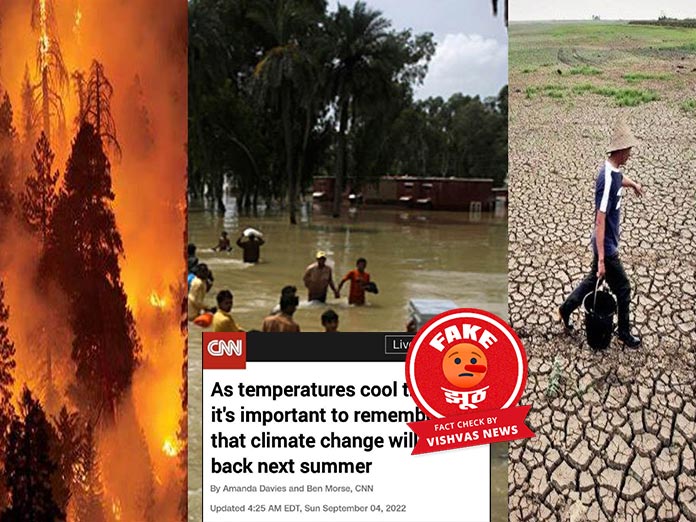 New Delhi (Vishvas News): A viral screenshot purporting to be of CNN (Cable News Network) claims that climate change is seasonal and will be back next summer.

However, Vishvas News, in its investigation, found the image to be fabricated and fake. The American news channel has not shared such news on September 4, 2022, on its website.

Facebook user Karlito Chamberz, on September 12, shared a screenshot claiming to be of CNN that read, “Climate change will be back next summer guys, for all those that didn’t know climate changes every season.”

Vishvas News searched on Facebook and found many similar claims doing rounds, as seen here and here. We first used Google keyword search to find the news story on the CNN website. However, after reviewing CNN’s website, no such article was found. The report did not appear under Amanda Davies and Ben Morse’s bylines.

Next, we searched CNN news stories with the same byline, published date and time. This search led us to a news piece: ‘Sebastian Vettel believes the world needs to ‘rethink our behaviors’ to tackle climate change’.

It appeared that the viral Facebook claim was an altered image from September 4, 2022 article on Sebastian Vettel, an F1 driver. No mention of climate change was found in the report.

We also checked the archived screenshot of the article on Wayback Machine (September 4, 2022) and found no changes were made to it at any time.

We scanned the profile of the user ‘The Ferryman’s Toll’ and found that he joined Twitter on January 2022, followed 93 and is followed by 2762 followers. His account description also read that he is a ‘Meme Terrorist’.

To confirm further, we contacted Matt Dornic, Head of Strategic Communications at CNN Worldwide, who replied on Facebook Messenger, “The image is fake. The story in question never appeared on our platforms, and the bylined authors do not cover climate.”

Conclusion: The viral image of the CNN headline stating that climate change is seasonal and will be back next year is fabricated and fake. The American news channel published no such headline.