Fact Check: Viral Taj Mahal post girl is not a foreign tourist but an Indian

The girl in the viral picture, who drew attention to the mess and pollution behind Taj Mahal, is not a foreign tourist but Lisipriya Kangujam, a child environmentalist from Manipur, India. Her vocal efforts led to the cleanliness drive at the famous monument by the local authorities. 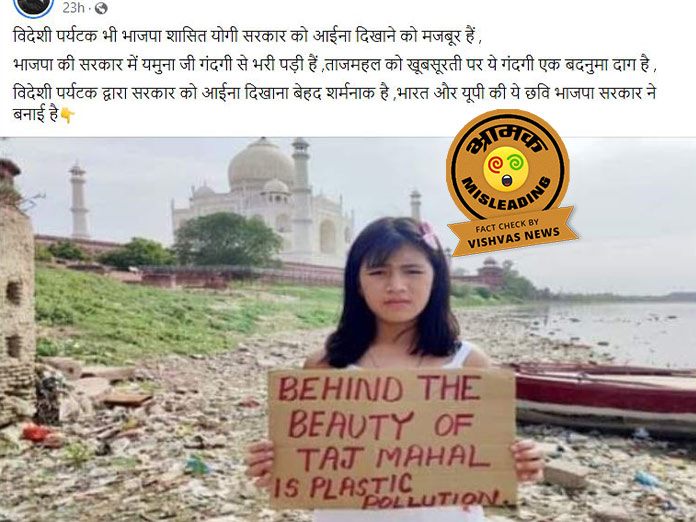 New Delhi (Vishvas News): A picture of a girl who drew attention about the pollution and mess created behind Taj Mahal is getting viral on social media. It is being claimed that the girl, who brought to fore the issue of pollution around River Yamuna and Taj Mahal, is a foreign tourist. Following the news, Leaders of the Opposition also sharpened their knives against the Yogi government by retweeting the picture.

However, Vishvas News in its investigation found the claim to be false as the girl in the viral picture turned out to be Lisipriya Kangujam, an Indian from Manipur. She is a child environmentalist who has also addressed the United Nations Climate Conference 2019 (COP25) held in Madrid on the issue of climate change.

Several other users, with similar claims, reshared the picture.

In the viral picture, a girl is seen standing at Yamuna river front with Taj Mahal in her backdrop; she is holding a banner which states, “‘Behind the beauty of Taj Mahal Is Plastic Polluton.’ (‘ताज महल की सुंदरता के पीछे प्लास्टिक प्रदूषण है।’)

Even after Kangujam’s denial, Manish Jagan Agarwal did not remove his tweet. Meanwhile, Lisipriya Kangujam, on her official Twitter handle, described herself as an Indian child environmentalist and climate activist, who is also the founder of an organisation called ‘Kangujam Child Movement’. She also shared her bio on Twitter, stating that she is a resident of the northeastern state of Manipur.

Kangujam regularly shares her environmental protection work on Twitter profile. After her recent post, the local authority swung into action and shared pictures of a cleaner Taj Mahal’s backyard. Kangujam retweeted the picture and released a video of the action taken after she raised her voice.

On being contacted by Vishwas News about her native place via Twitter, she replied, ‘I was born in Manipur and brought up in Delhi. This is not the first time people have called me Chinese or foreigner. Such people do the work of dividing our country. I have represented India in the United Nations. Such racial abuse against the people of Northeasterns must stop. It cannot be accepted at any cost. I am sad about this matter. I am a proud Indian, not a foreigner. I have my identity, my name and my story.’

Conclusion: The girl in the viral picture, who drew attention to the mess and pollution behind Taj Mahal, is not a foreign tourist but Lisipriya Kangujam, a child environmentalist from Manipur, India. Her vocal efforts led to the cleanliness drive at the famous monument by the local authorities.