Actor Mukesh Khanna has not tweeted against the Bollywood fraternity in any of his posts. The viral Twitter screenshot has been shared from a parody account and is fake! 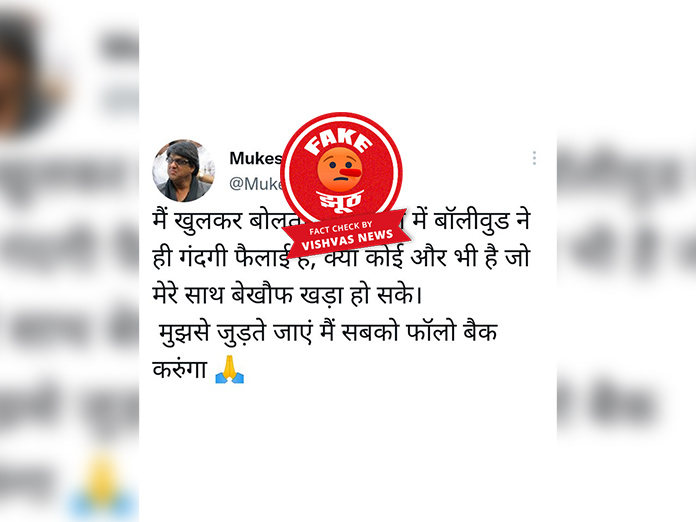 New Delhi (Vishvas News): A fake tweet in the name of Indian actor and producer Mukesh Khanna went viral on social media on September 2, 2022. The viral Twitter screenshot of ‘Shaktiman actor’ targeted Bollywood for spreading filth in the country and included calls to join him in his fight against the industry by following his account.

Facebook user ‘Devraj Raj’ posted a Twitter screenshot of Mukesh Khanna, which stated, “I speak frankly, Bollywood has spread filth in my country, is there anyone else who can stand with me fearlessly. keep joining me i will follow back everyone.”

Vishvas News first checked the Twitter account mentioned in the viral screenshot. @Mukeshk_1, which was created in June 2022, was found to be a parody account of Mukesh Khanna and has 11.9k followers.

Then while searching for the original Twitter account of the ‘Shaktiman’ actor on Google, we came across the YouTube account of Mukesh Khanna – Bheeshm International – with 1.17 million subscribers. The page, formed on May 2, 2019, had 127,993,550 views.

Hence to investigate further, we directly contacted ‘Mahabharat’ actor Mukesh Khanna , who replied, “The viral screenshot post is not from my account. It is fake. My account is @actmukeshkhanna.”

Notably, the Facebook user Devraj Raj is followed by 979 people on social media and his shared post, which 819 users have reshared, has received over 2.2k comments so far.

Conclusion: Actor Mukesh Khanna has not tweeted against the Bollywood fraternity in any of his posts. The viral Twitter screenshot has been shared from a parody account and is fake!