Conclusion: It is evident that the video does not show Pakistan flags being waved during Congress’ Bharat Jodo Yatra. Those are IUML flags, which is a political party in India. 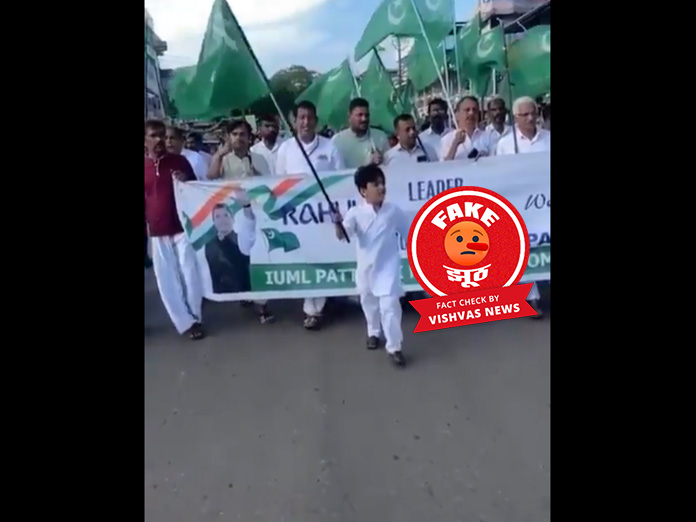 Vishvas News investigated and found the viral post to be fake. The flags raised in Kerala as shown in the video, are those of the Indian Union Muslim League (IUML) which is the solid green flag with the crescent. In contrast, Pakistan’s national flag has a white stripe on it.

Facebook user Krishna Bundela shared the viral post on social media by writing, “Procession of Pappu’s visit to India. Flag of Pakistan. How many proofs will be given for secular Hindus, i.e. to open their eyes to convince stupid Hindus that Congress is a deadly party for this nation.”

Vishvas News started its investigation using INVID tool. We checked the claim’s veracity and found many similar claims viral on Facebook and Twitter. The post was also shared by Sudarshan News TV CMD & Editor-in-Chief on Twitter.

Next, we analysed the video and found that Pakistan’s national flag has a white stripe, but the one in the video has none.

On close inspection of the video, we observed a few visible words written on the banner, like IUML, which stands for the Indian Union Muslim League, a political party in India that was formed in March 1948 in the south Indian city of Madras (now Chennai). The solid green flag with the crescent is the symbol of the political party in the state.

Through keyword search on Google, we found that the banner in the viral video also has these words written on it – ‘IUML Pattambi Mandalam Committee’ welcomes Rahul Ji. We also found a similar video on the page of Muslim Youth League Guruvayur dated September 26, 2022. Congress leader Rahul Gandhi is currently on the ‘Bharat Jodo Yatra’ in India and was visiting Palakkad district on September 26, 2022. A significant news website also carried the same news.

Notably, Pattambi is a town taluk and municipality in the Palakkad district of the state of Kerala

To get to the base of the information, we contacted the IUML Head Office in Kozhikkode, Kerala, where we got in touch with the Office Secretary Hamza MK, who refuted the claims by saying, “The flag is the symbol of the political party in the state.”

National Congress Spokesperson at Indian Youth Congress Anand Jat called the post on social media misleading and said that action should be taken against miscreants.

On social scanning, we found that the user has 1.7k friends on Facebook and shared the post with 42 other users.

Conclusion: Conclusion: It is evident that the video does not show Pakistan flags being waved during Congress’ Bharat Jodo Yatra. Those are IUML flags, which is a political party in India.