Viral video of man escaping a fall after the footpath collapsed and caves in, is from Tirupati city in Andhra Pradesh. 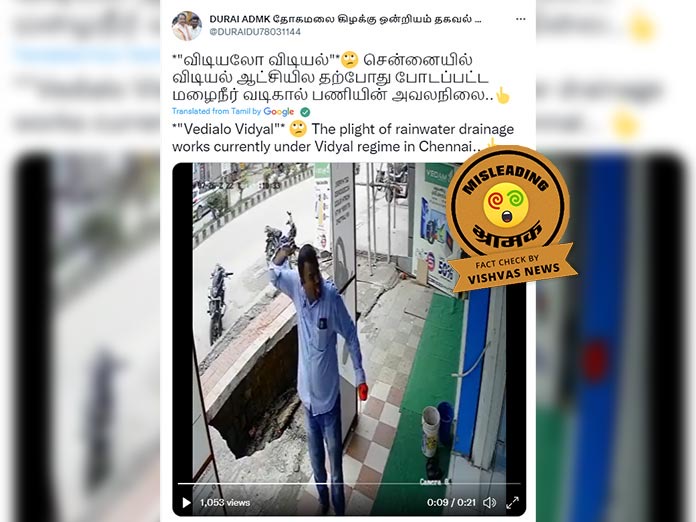 New Delhi (Vishvas News): A video is going viral on various social media websites, where a man is seen escaping a fall he could have had with the footpath collapse outside a mobile shop. The video has gained views and likes in millions. However, some are now claiming that the video is from Chennai. Vishvas News in its investigation, found the video to be from Tirupati city in Andhra Pradesh. The drainage issue has been resolved now.

Vishvas News started the investigation by uploading the video in the InVid tool.

With the keyframes, and the Google Reverse Image search, we found out that there were numerous media reports about the incident but no one mentioned the place where it happened.

We then checked with keywords on YouTube and came across a channel that had shared the video too.

This confirmed that the video is from Tirupati city in Andhra Pradesh from Air Bypass road.

Vishvas News then connected with a journalist from Andhra Pradesh, who provided us with the contact number of ‘Vedam Mobile Shop‘ in front of which the incident had happened.

We contacted the store and spoke to them. The store manager said, “The incident seen in the viral video happened in front of our store over a week earlier. The man escaped a fall after the drainage collapsed.“
He also told us that this was a municipal issue and that it has been resolved now.

In the next step of investigation we did a social background check on the Twitter profile that has shared the video. DURAI ADMK தோகமலை கிழக்கு ஒன்றியம் தகவல் தொழிநுட்ப @DURAIDU78031144 joined Twitter on January 2021 and has 1,368 followers.

Conclusion: Viral video of man escaping a fall after the footpath collapsed and caves in, is from Tirupati city in Andhra Pradesh.