Vishvas News investigated and found that the viral video is from Pakistan and shared with a false claim that it is from Delhi. 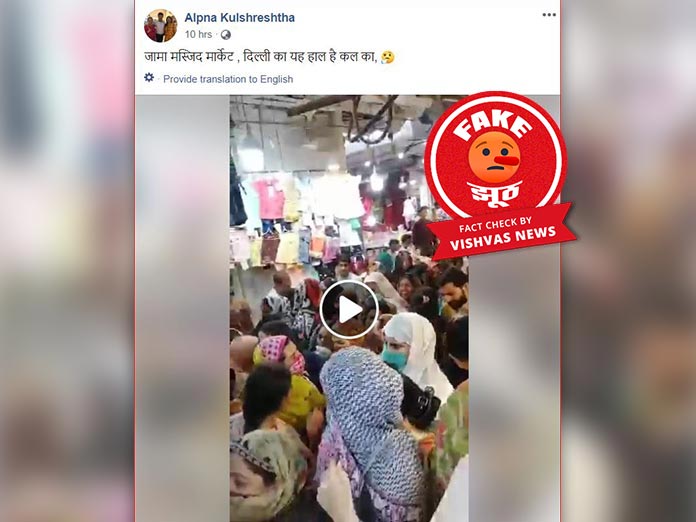 New Delhi (Vishvas News): A viral going viral on social media claims that people are flouting lockdown norms in a market in Delhi. Vishvas News investigated and found that the viral post is fake. The video is actually from
Faisalabad, Pakistan and not from Delhi.

A viral video shared on social media on May 21, 2020 by a user named Alpna Kulshreshtha reads: “This is yesterday’s condition in Jama Masjid Market, Delhi.” The archived version of the post can be checked here.

Vishvas News used INVID tool and performed Google reverse image search of the screengrabs. We found an old video on the youtube Channel named ALL ROUNDER. It hs been stated in the Youtube video that the video clip is from New Anarkali, Faisalabad, Pakistan uploaded on May 18, 2020.

We also found the viral video on the Facebook page Humans of Faislabad. It was stated that the video is of May 18, 2020 from Faislabad, Pakistan. The video can be viewed here.

In the video, we also saw a board in one of the screengrabs we got using InVid too. The text in the board was written in Urdu. We translated and found that ‘Anne Shoes’ was written on the board. We searched Anne Shoes on Google. We came to know that there is a shop name ‘Anne Shoes’ in Anarkali market of Faisalabad, Pakistan.

Vishvas News spoke to Central Delhi’s DCP Sanjay Bhatia. He said that the viral video is not from Delhi.

We performed social scanning of the user who had shared the viral video claiming that the video is from Delhi. The user named
Alpna Kulshreshtha is based out of Delhi.

Conclusion: Vishvas News investigated and found that the viral video is from Pakistan and shared with a false claim that it is from Delhi.