Fact Check: Viral video of people being electrocuted during the Ganapati procession is old, not recent

Viral video of people being electrocuted during the Ganesh procession in Gujarat’s Ankleshwar is old, not recent. The video is being shared with misleading claims. 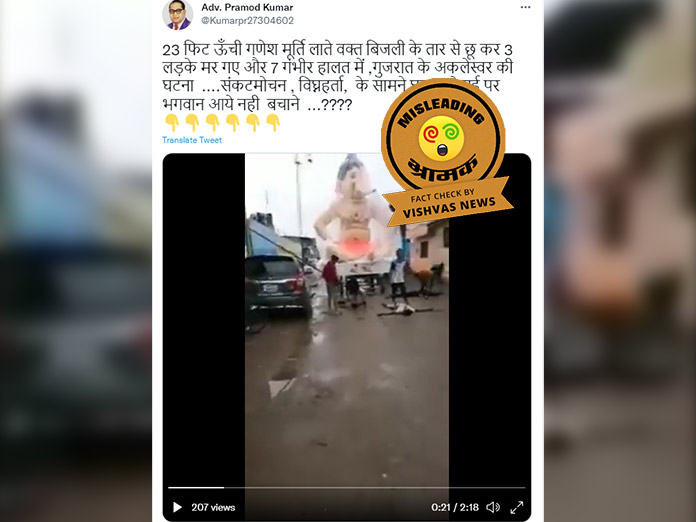 Vishvas News (New Delhi): Vishvas News came across a video being widely shared on various social media platforms. It was claimed that 3 had died and seven were injured during the Ganapati procession. The video was claimed to be from Ankleshwar in Gujarat and was shared as recent. However, Vishvas News in its investigation found the incident to be from the year 2019.

Translation: While bringing a 23 feet tall Ganesh idol, 3 boys died after touching an electric wire and 7 were in critical condition, the incident is of Gujarat Ankleshwar. Incident happened in front of God but he did not come to save.

Vishvas News started the investigation by uploading the video in InVid tool. After getting numerous keyframes, we ran a Google reverse image search on all the keyframes.

It was informed in the news that the incident happened in Ankleshwar of Bharuch district in Gujarat in the year 2019.

It was hence clear that the video was not recent but from 2019.

In the next step of the investigation, Vishvas News contacted Shatrughan Sharma of Dainik Jagran’s Gujarat edition. He said, “This accident happened 3 years ago while bringing Ganesh idol to Adarsh ​​market in Ankleshwar, Gujarat. Three youths were killed in this accident while the other were badly injured. It was rainy season and the Ganesh idol being 23 feet tall touched the electric wires hanging above, due to which 10 youths who are bringing the idol were badly hurt due to electrocution. With the aim of making fun of faith and reverence, after 3 years, once again calling this incident fresh, some mischievous elements are trying to question the religious faith of the people. This is totally misleading and hurting the religious sentiments of the people.“

In the last step of the investigation, we conducted a background search on the user that shared the post. Adv. Pramod Kumar joined the platform on May 2020. He has 4867 followers.

Conclusion: Viral video of people being electrocuted during the Ganesh procession in Gujarat’s Ankleshwar is old, not recent. The video is being shared with misleading claims.