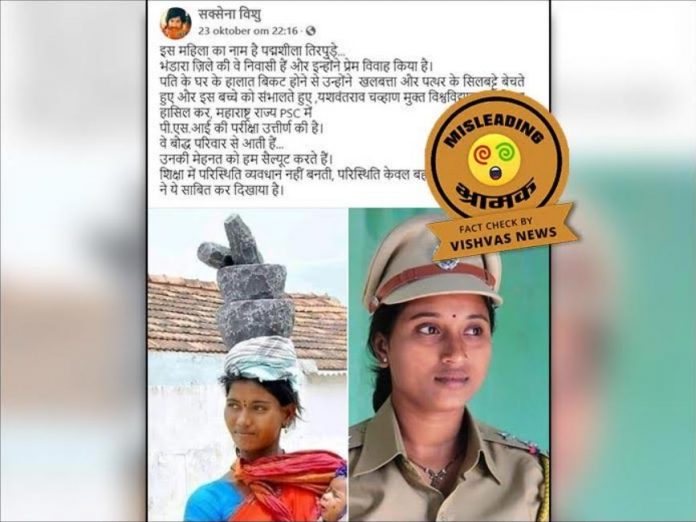 New Delhi (Vishvas News). A set of two photographs is getting viral on social media. In the first image, one can see a labourer woman carrying a baby in one hand and stones on her head, whereas the second photograph is of a policewoman. It is being claimed that both the photographs are of Padmashila Tirpude who used to sell stones as the financial condition of her husband was not good. Later she studied and cleared the Maharashtra Public Service Commission exam and joined the police force as Sub-Inspector.

Vishvas News found that the image of labourer woman carrying stones on her head is not Padmashila, neither had she done any labourer work in her struggling days.

Facebook user “Saxena Vishu” shared the post with a caption in Hindi that roughly translates to – The name of this woman is Padmashila Tirpude…She lives in the Bhandara district and had a love marriage. The financial condition of her husband was not well, so she looked after her child while selling stones. Later she completed her education at Yashwantrao Chavan Open University and cleared the PSI exam in MPSC. She comes from a Buddhist family…We salute her struggle. The situation is only an excuse, this woman has proved this.

We started our investigation by looking for each and every claim.

She lives in Bhandara district and she had a love marriage

According to Padmashila, both facts are true.

The financial situation of her husband was not good sho she uses to sell stones
Padmashila told Vishvas News that thought the financial condition was not good, but she never did any labourer work, rather she was a homemaker.

According to Padmashila, after giving birth to her two kids, she completed her graduation and later she cleared the PSI exam.

She comes from a Buddhist family

While speaking to Vishvas News, Padmashila said that this post got viral three years back also. At that time also she had clarified that this is not her photograph and she has never done any labour work in her struggling days. Presently she is posted in Nagpur.

The post is shared on Facebook by the user named “Saxena Vishu”. When Vishvas News investigated we found that the user hails from Delhi.

Conclusion: Viral photograph of a labourer woman is not of Padmashila Tirpude. According to Padmashila, she was not a labourer before becoming a Sub Inspector. A viral post is misleading