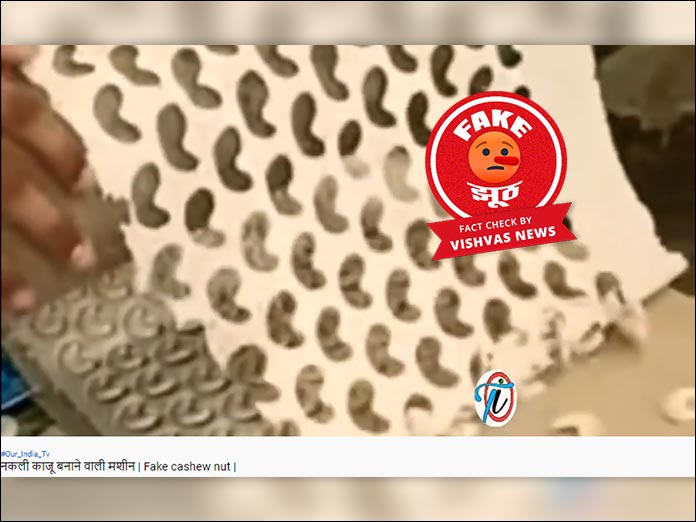 New Delhi (Vishvas News): A post that has resurfaced on social media claims that fake cashews are being manufactured through a machine. In the video, a machine is cutting out cashew-shaped objects from a white sheet. Vishvas News earlier investigated the post and found it to be fake. It is actually manufacturing cashew-shaped snacks and not the actual cashew nuts.

Vishvas News has received this post on it Whatsapp Chatbot for fact check.

The post shared on Whatsapp Chatbot shows a video in which a machine is cutting out cashew-shaped objects from a white sheet. As per the claim fake cashews are getting manufactured through machines. Here’s the link shared for investigation.

When Vishvas News earlier investigated we used Google Reverse Image Search of the screengrabs of video through InVID tool. The same video was found on a Youtube channel ‘Tushar Pandya’. The video was titled ‘Kaju Nimki Making Machine.’

Upon further investigation, we found the same video on the Twitter account of Tushar Pandya stating that the machine shown in the video manufactures cashew-shaped snacks.

We spoke to Tushar Pandya who owns Chotiwala Foods and Machines that manufactures snacks making machines.

Conclusion: Fake post claiming cashews are getting manufactured through machines has resurfaced on social media. The machine shown in the video is actually manufacturing cashew-shaped snacks.