In the investigation of Vishvas News, this claim turned out to be false. The viral video is not related to the Russia-Ukraine war. This is a video of a blast in Lebanon in 2020. 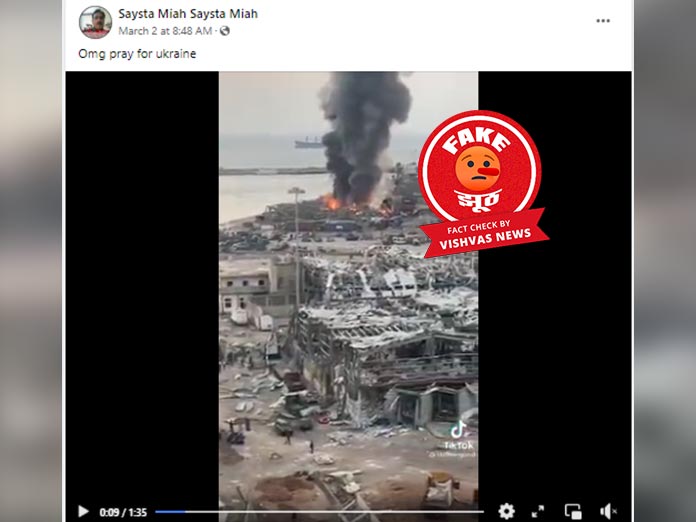 New Delhi (Vishvas News). A video is going viral on social media, claiming that it shows the Russian invasion of Ukraine. In the viral video, strong flames can be seen rising from a building. At the same time, a large part of the vicinity of the building can be seen destroyed, making it look like it is a fire caused by an explosion. This claim turned out to be false in the investigation of Vishvas News. The viral video is not related to the Russia-Ukraine war. This is a video of a blast in Lebanon in 2020.

After searching the key-frames of the viral video on Google reverse image, we found this video on the verified YouTube channel ‘KHOU 11’. The video was uploaded on August 5, 2020. The description with the video read “Here’s the aftermath in Beirut after the deadly explosion in the Lebanese capital. Dozens were killed and thousands were injured. Part of the city looks like it’s completely destroyed. Video credit: Rashad Achkar.”

We also found news regarding this incident at www.khou.com.

This video was also uploaded on the Twitter handle of khou.com on August 5, 2020. According to the description, the video is from a deadly explosion in the Lebanese capital.

The same video was also tweeted by journalist Jenan Moussa on August 5, 2020. Along with it was written, “My city Beirut after the explosion. What a tragedy. It’s too much to bear.”

Vishvas News has contacted the fact-checking team of Ukraine via email for confirmation in this regard. We have also contacted journalist Jenan Moussa. The news will be updated as soon as the reply is received from there.

Saysta Miah Saysta Miah, the user who shared the viral video with a false claim, has around 5000 friends on Facebook.

Conclusion: In the investigation of Vishvas News, this claim turned out to be false. The viral video is not related to the Russia-Ukraine war. This is a video of a blast in Lebanon in 2020.